NextQuarantine Reads…
Chart of the Week

The combined hit to both demand and supply sides means that the COVID 19 recession will be a departure from the those seen in the 1930s and 2008: inflation is indeed likely. The risk is that the recovery may cause 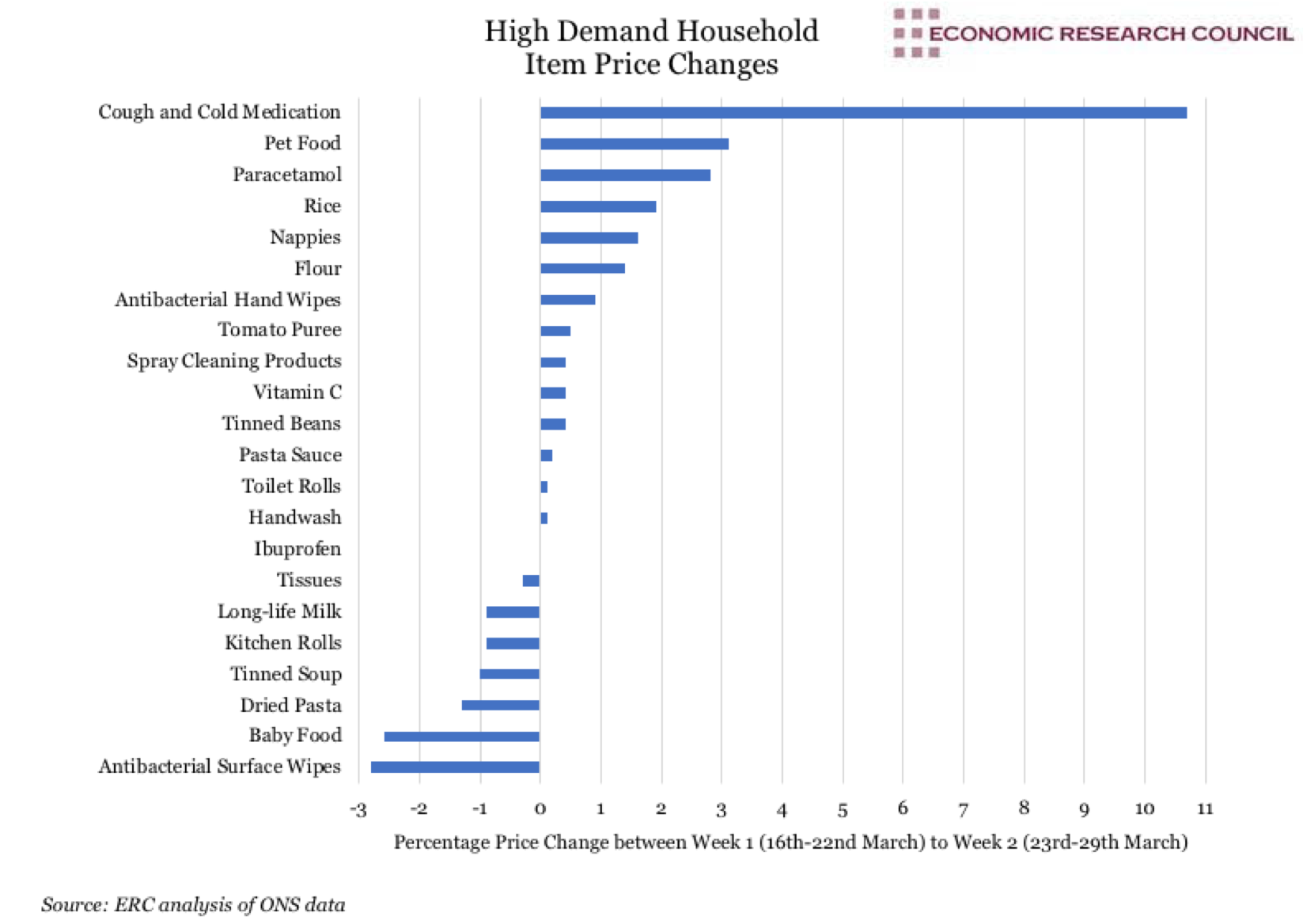 We can see from the chart that in period covered, a wide range of price movements occurred, both negative and positive. The overall change for all high demand items shown was a 1.1% increase. For cough and cold medication, we see the steepest increase with a rise of 10.7%. Most items saw far less movement on prices, with over half the 22 items moving between -1% and +1% in the period shown. Indeed, prices for antibacterial wipes fell the most, by 2.8%, in the period. When aggregating long life food items, prices decreased by 0.4% and where only household and hygiene items were concerned, prices showed no change.

What does the Chart show?

The chart displays the change in prices of essential household items in the UK, between the week commencing 16th March and the week commencing 23rd March, measured in percentage change. The data was selected from a handful of UK retailers and the list of items was based on anecdotal evidence of items undergoing increased consumer demand. The Office for National Statistics, who compiled the data, have stated the limitations of their methodology and asserted that the above data should by no means be used to predict more established metrics like CPI inflation. The data forms part of the ONS’ efforts to provide timely information on the ongoing COVID-19 crisis’ effect on the economy.

Although the media has been awash with reports of unscrupulous retailers hiking prices for shortage items, it would appear that most have refrained.  This ONS data is new and until more is available, it will be difficult to ascertain whether food inflation has or will hit the UK to the extent seen in China, where consumer food inflation hit a decade high last month as activity is yet to return to pre-virus normality.

The disruption from the COVID 19 pandemic has spread into every sector of the global economy, disrupting consumers, retailers and producers alike. There were fears that as the virus reduces or removes demand for certain goods, standard measures of inflation could mask soaring prices for essential items undergoing supply chain disruption or shortages. Critics of the rescue packages offered by governments around the world have focused on the inflationary potential of measures such as helicopter money and universal basic income. Michael Pearce, an economist with Capital Economics in New York, is quoted by Reuters asserting that ‘there is little in the inflation data to distract the Fed from its immediate goal of supporting the economy during the coming coronavirus hit’.

Two shocks will likely lead to large spikes in unemployment globally: The first, the shock to productivity from restricting the populations’ ability to work, and the second, the shock to demand by the wholesale cancellation of leisure and travel activities. The combined hit to both demand and supply sides means that the COVID 19 recession will be a departure from the those seen in the 1930s and 2008: inflation could well be likely. The risk is that the recovery may cause stagflation: slow output growth and mounting price inflation. Central Banks’ prior propensity to keep cutting interest rates despite few indicators of recession, has left them with few tools in their arsenal with which to combat this.

Further, as Peter Warburton of Economic Perspectives suggests ‘The development of leveraged, just-in-time, horizontally-integrated, long-distance supply chains doesn’t look too smart now… Nor the creation of the gig economy, where up to a quarter of the working population accepts assignments, contracts, jobs or piece-work on a real-time basis.’.

It is possible however, that businesses will initially work to do everything possible to ensure they survive, including selling off inventory at deep discounts. Combined with the shift of many consumers to online shopping as a result of quarantine (making them more likely to bargain hunt and compare prices), there is potential for this to counter or indeed delay inflation.

Finally, a mention of a factor of unknown significance: the likely reduction in the use of cash. With many people compelled to use card/contactless payments in shops during the crisis, and the widespread knowledge of how cash circulating in the economy is often laden with dirt, even if it does not necessarily effectively spread viruses it is likely that consumers in the west may well reduce or eliminate their use of cash.