Exiting the Lockdown: The Range of Impact on GVA by Sector

It is imperative that the public are informed in a cogent, digestible and evidence-based manner on how best to limit new infections as the economy begins to get back on track. In the absence of clear, authoritative information that 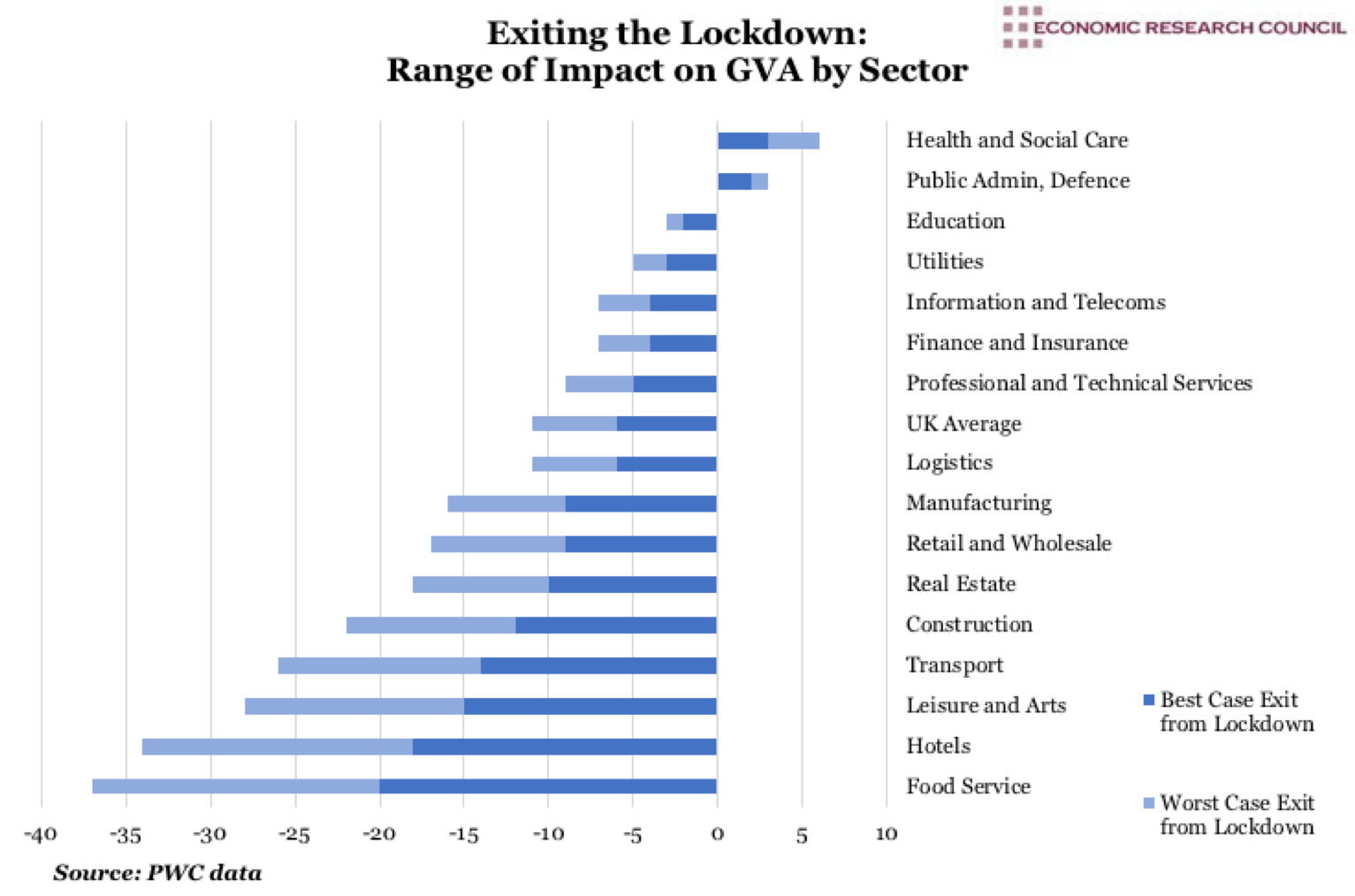 Exiting the Lockdown: The Range of Impact on GVA by Sector

The chart paints a gloomy picture of the anticipated effect of the pandemic on annual GVA, with the UK-wide, cross-sectoral average decrease ranging from -6% to -11%, depending on the nature of the transition out of lockdown and despite the counter effect of growth in healthcare and public administration.

As might be expected, the chart shows that the most profound, if short term, impact will be felt in the food service (restaurants, cafés and pubs rather than supermarkets or grocers), hotels and transport sectors, which will experience retractions in annual GVA of around 14% to 20% should exit from lockdown measures take a smooth course. Should the worst happen and a second surge causes reimposition of measures, this impact will range from 26% to 37%. As would be anticipated, sectors where home-working is feasible on a wider scale suffer the least impact, although they are still considerably negatively affected. These sectors include finance and insurance, professional and technical services, IT and utilities.

What does the Chart show?

The chart displays the possible impact of the lockdown measures on sectoral Gross Value Added. Two scenarios have been devised by the producers of the data, PWC, who differentiate a ‘smooth exit’ from lockdown from a ‘bumpy exit’, both of which detail April 2020 as the peak with the overall duration lasting until a vaccine becomes available. Their estimate for production of a successful vaccine is 12 to 18 months’ time. Both scenarios are based on the assumption that, via government rescue policy measures, wide scale business failures can be avoided.

The smooth exit scenario suggests a reproduction rate of 1 or below (the reproduction rate is a measure of how many others those with the virus will infect); and is contingent on the enacting of measures including, but not limited to, contact tracing, testing, quarantine and social distancing. In a smooth scenario, restrictions would be lifted piecemeal beginning in mid to late May and not result in a second surge of infection. However, a bumpy exit scenario, although identical in initial timeline, involves the effect of lifting restrictions to be a rise in reproduction rate to over one, causing not just a second peak of infections, but also the reimposition of some restrictions and further economic impact.

The economic impact is shown by percentage of GVA (negative in all but two sectors) against the left hand axis.

Why is the Chart interesting?

Although the market is likely to reallocate labour into the sectors best serving the UK economy’s ‘new normal’, most of the negative impact we can see originates from the demand side as a vast rise in unemployment is anticipated if not underway. Despite a fairly dismal overall picture, some sectors are experiencing mixed effects from the lockdown measures, for example food retailers. As reported in the Guardian, Sainsbury’s saw growth in grocery spending, up 12% in the 7 weeks leading to 25th April, and have saved some £450 million in business rates. However this has been countered by the £500m cost of 15% staff absence (down from a quarter at the start of the pandemic); and by the drop in sales of non-food items such as clothing and general merchandise, sales of which were down 53% and 22%. In the group’s wider portfolio, Argos has capitalised on the surge in home-working making increased sales of 9%.

Given the variation in economic impact, the chart suggests the fundamental importance of government messaging as the nation begins to come out of lockdown. It is imperative that the public are informed in a cogent, digestible and evidence-based manner on how best to limit new infections as the economy begins to get back on track. In the absence of clear, authoritative information that emphasises the continued need for the maintenance of good hand hygiene, social distancing and shielding of vulnerable members of society- among other measures- we can see the destructive impact of the pandemic almost doubling in most sectors.

As much as has been written about how the country can avoid a second peak of outbreaks, uncertainty remains, particularly on the issue of acquired immunity of those who have recovered where the science is still shaky. The policy of test, track and trace (widely accepted the linchpin of successful nations’ battle with Covid 19), has been implemented on a very small scale in the UK and was cumbersome in its operation. Quoted in the Huffington Post, infectious disease expert Dr Peter English highlighted the role of technology as the crisis will necessitate ‘telling someone: ‘You have been in contact with a case – you must on pain of prosecution self-isolate for 14 days,’ and some system of making sure that happens.’. Although effective, implementation of such systems is not without civil liberty implications and it is difficult to see how Parliament could effectively scrutinise this in both the timeframe and depth needed under the circumstances. Indeed, there are significant complexities around the urgency of ending lockdown measures, as delaying a total lift of restrictions until the onset of winter flu season will see the emergence of many other viruses in the mix and make diagnosis and management of the outbreak even more challenging.