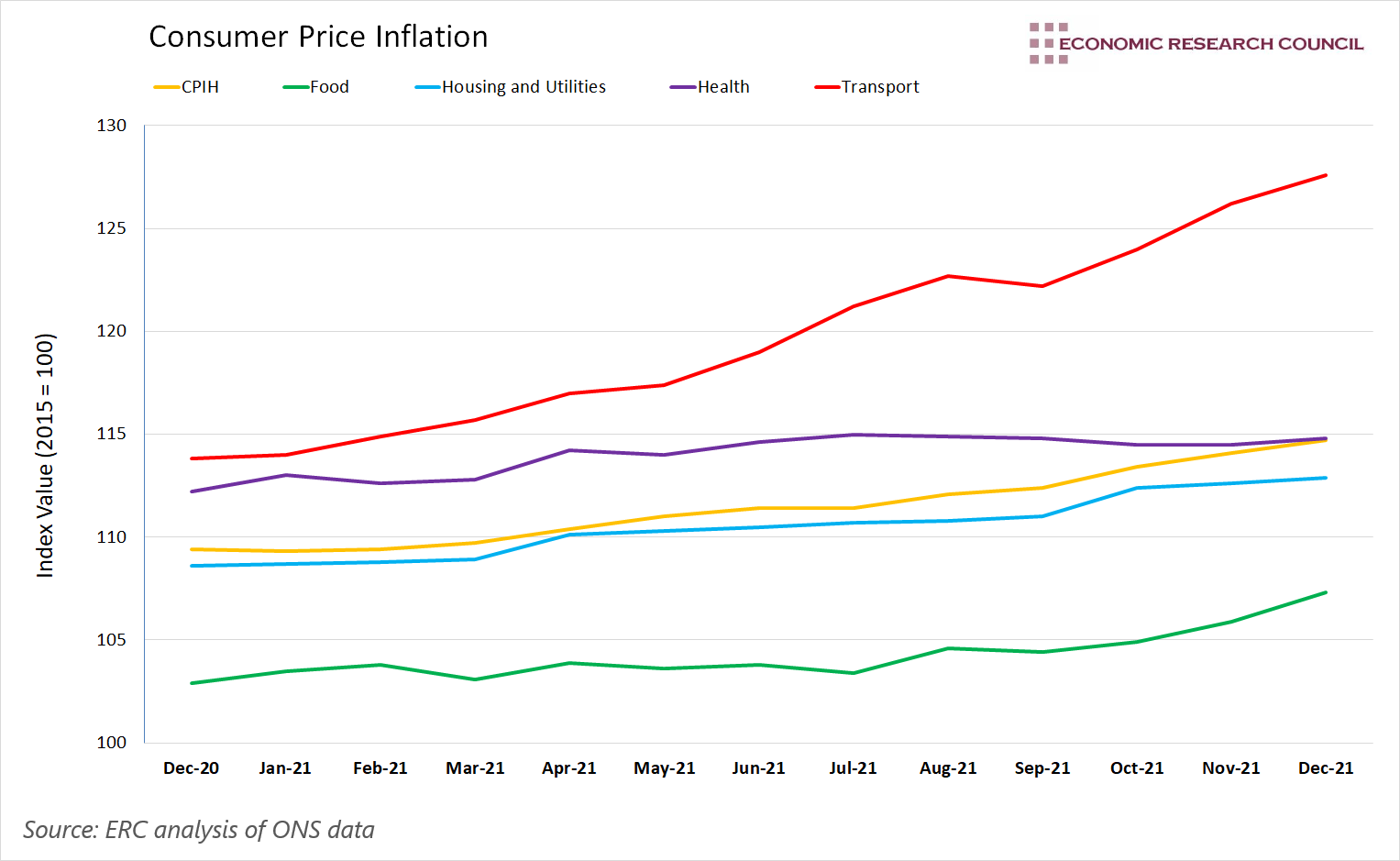 In the past year, people in the UK have experienced larger than normal increases in the cost of living, with some categories of goods having as high as a 14% increase. Skyrocketing gas prices are making logistics, transportation, and energy extremely more expensive. The lorry driver shortage has played a part in this and has also contributed to the sharpest increase in the price of food since 2008. Rising taxes, combined with soaring energy costs and stagnant wages, will place significant pressures on families and potentially disrupt the post-pandemic recovery, with poor people most affected.

There are multiple factors contributing to the cost-of-living crisis in Britain. Prices are rising for most goods. Costly energy and food, essential for maintaining basic living standards, are hitting Britons hard whilst other prices continue to rise. This week’s chart analyses the changes in the price of the most essential goods and services.

Much has been discussed about the extreme increases in the price of certain household utilities. The price of natural gas is now four times higher than it was last year. The UK holds around 1% of the continent’s gas storage, compared to 16% in Germany. With the closing of one of the country’s largest storage facilities in 2017, the UK has become much more susceptible to fluctuations in natural gas markets. However, Britain has experienced gas supply shocks in the past; such as the 2018 shortage, and had managed to deal with short term price spikes within a few months. The UK and Europe as a whole are struggling to reclaim lacking reserve capacity, and with no signs of demand decreasing in sight, 2022 may see a continuation in the rise of fuel and energy costs. Energy and food prices have a substantial impact on older and poorer citizens’, with as many as 54% saying that they would have to heat their home less often according to a survey by Age UK.

A shortage of lorry drivers, disincentivized by poor pay and working conditions, created significant pressure on the movement of goods. With a huge backlog of prospective drivers awaiting paused tests for their lorry license, the hiring of much-needed drivers has slowed to a near halt, and this has caused a bottleneck in the supply chain. As a direct result, food and grocery prices have gone up, rising to their highest since the 2008 crash with a further 2.3% rise on the horizon, according to research by Capital Economics.

In addition, British people have been experiencing stagnant real wages for more than a decade. A mild economic recovery following the 2008 Financial Crisis has struggled to get wages back to pre-crash levels. Average earnings grew 3.5% last year, but because of climbing inflation real wages have been cut 1.6%. People today are paid a similar amount in real terms to what they were fourteen years ago. With this in mind, an effort to bid up nominal wages may be the only solution for those feeling the cost of living squeeze.

However, the Bank of England is afraid of a potential wage-price spiral whereby high inflation and rising costs of living lead workers to demand higher wages that will in turn force companies to charge more for goods and services in a vicious cycle of ever-increasing inflationary pressure. This was a major issue in the 1970s, although trade unions were much more influential in the labour market. Today, some economists suggest that a wage-price spiral is unlikely to occur due to lower union membership and reduced bargaining power. Still, the Bank of England remains cautious, partly expressed through Andrew Bailey’s request for wage restraint, as well as the fact that four of the nine Monetary Policy Committee members voted for a more aggressive rate rise than the 0.5% figure that was announced. Whether this will counteract rising prices or not is questionable, due to the supply side factors causing inflationary pressure.

All of this comes on the precipice of an increase in National Insurance rates. Boris Johnson’s plan will see that workers pay an additional 1.25% in deductions at a time when wages are struggling to get people by. With small businesses paying almost twice as much for energy and raw materials, these tax hikes could present a significant blow to the UK’s hope for a strong recovery.