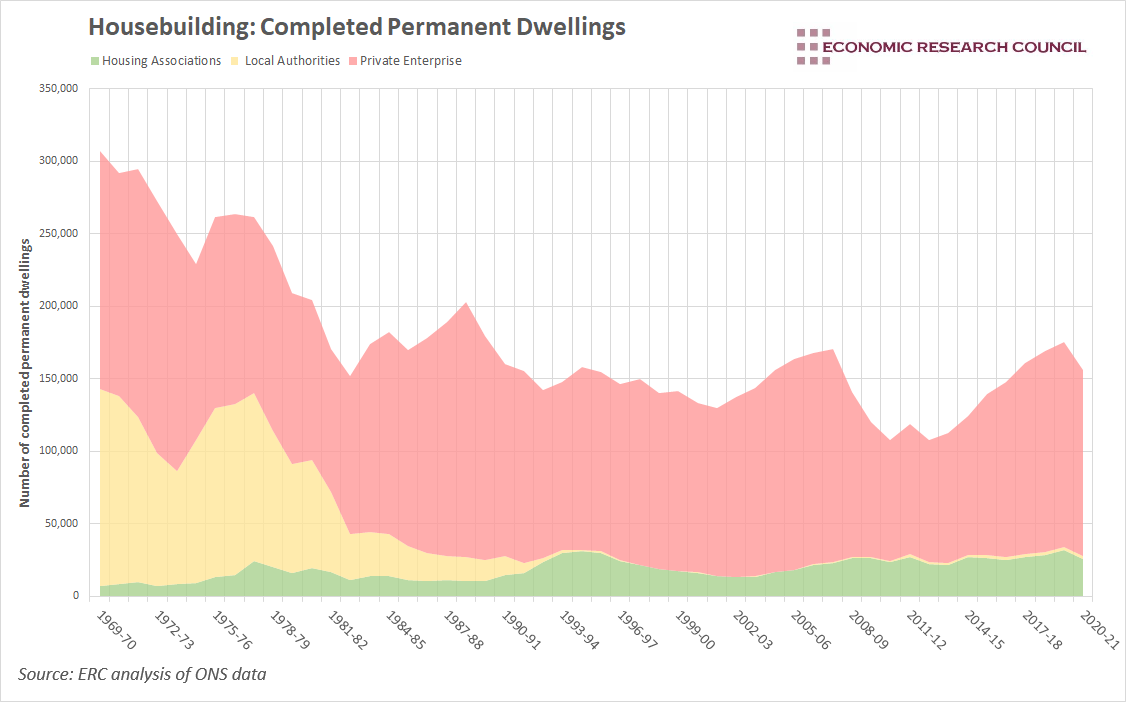 Since the 1970s housebuilding has been on a downward trend. Whilst private housebuilding picked up some of the slack that local authorities left behind, their supply of housing has been cyclical over the period. The chart of the week suggests that housing associations have the potential to play an increasing role in England’s housebuilding strategy.

The chart shows the number of permanent dwellings completed in England between 1969 and 2021 in each financial year, split between those built by private enterprises, local authorities, and housing associations.

The issue of housing captures the imagination of many across the country. Largely understood through ever-increasing house and rental prices, the issue of housing market efficiency has strongly come into question. Much has been discussed about Right to Buy as well as the availability of credit boosting demand to excessive levels. This week’s chart, however, assesses how the supply of housing has changed over time, and the extent to which we can learn from the factors that have caused these changes.

High interest rates of the early 90s suppressed demand for housing. At the same time, high unemployment meant that many who had taken out large mortgages in the decade before became unable to afford them. Economic conditions were worsening, house prices fell, and as the chart shows, the supply of housing significantly dropped. Note that in the 1990s, partly due to the low levels of local authority housing, the fall in privately constructed dwellings became the driving cause of the overall fall in newly built properties. Between 1989 and 1993, the number of privately constructed dwellings fell by 60,000 (34%). Looking even closer, we can see that the number of housing association dwellings actually increased during this period. Combining the experience of the 1980s and 1990s, we start to see evidence of the cyclical nature of private housebuilding.

Much of the 2000s was a picture of steady growth in the supply of housing. Economic conditions were particularly favourable during much of this period. Cheap credit was readily available, and average house prices shot up from £100,000 in 2000, to £225,000 in 2007. Then came the recession, which threw overall housebuilding to the lowest levels seen since the 1930s. Private housebuilding then recovers, before another dip caused by the pandemic.

A number of points are of note, based on the information from the chart. Firstly, a lack of council housing is often cited when discussing the shortage in housing supply. Whilst this is one interpretation, another is that council housing has actually constituted such a small proportion of total housebuilding since the mid-1990s, whilst governments of both colours have been in power. There seems to be consensus across the aisle that council housing need not form a prominent part of housing policy. So how then do we address the shortage in the housing supply? The current government has set itself the target of building 300,000 homes per year. Some estimates suggest that 345,000 houses need to be built each year to address the shortage. The most recent peak in 2019/20 was only half this figure. It is quite clear that the number of completed dwellings needs to increase, and this increase must be sustained. If the government’s target is to be met, let alone the 345,000 needed, the cyclical nature of private housebuilding clearly cannot be relied upon. Even if there was political appetite for an increase in local authority dwellings, this may not be the answer. The chart shows that prior to the 1980s local authority housebuilding behaved in a very similar way to private housebuilding, indicating shared cyclical characteristics. Poor economic conditions in the early 1970s seemed to impact both private and local authority housebuilding, which is understandable as governments face constraints that come with downturns.