COVID 19: The Fate of Airlines

On Wednesday the US Senate passed the Coronavirus Stimulus bill, with little time for scrutiny. This is perhaps unsurprising, given the scale and urgency of the health, social and economic crisis gripping the United States. Importantly for the current administration, it appears to be unprecedented yet decisive action, the kind of presidential behaviour needed if Trump is to win a second term in office. 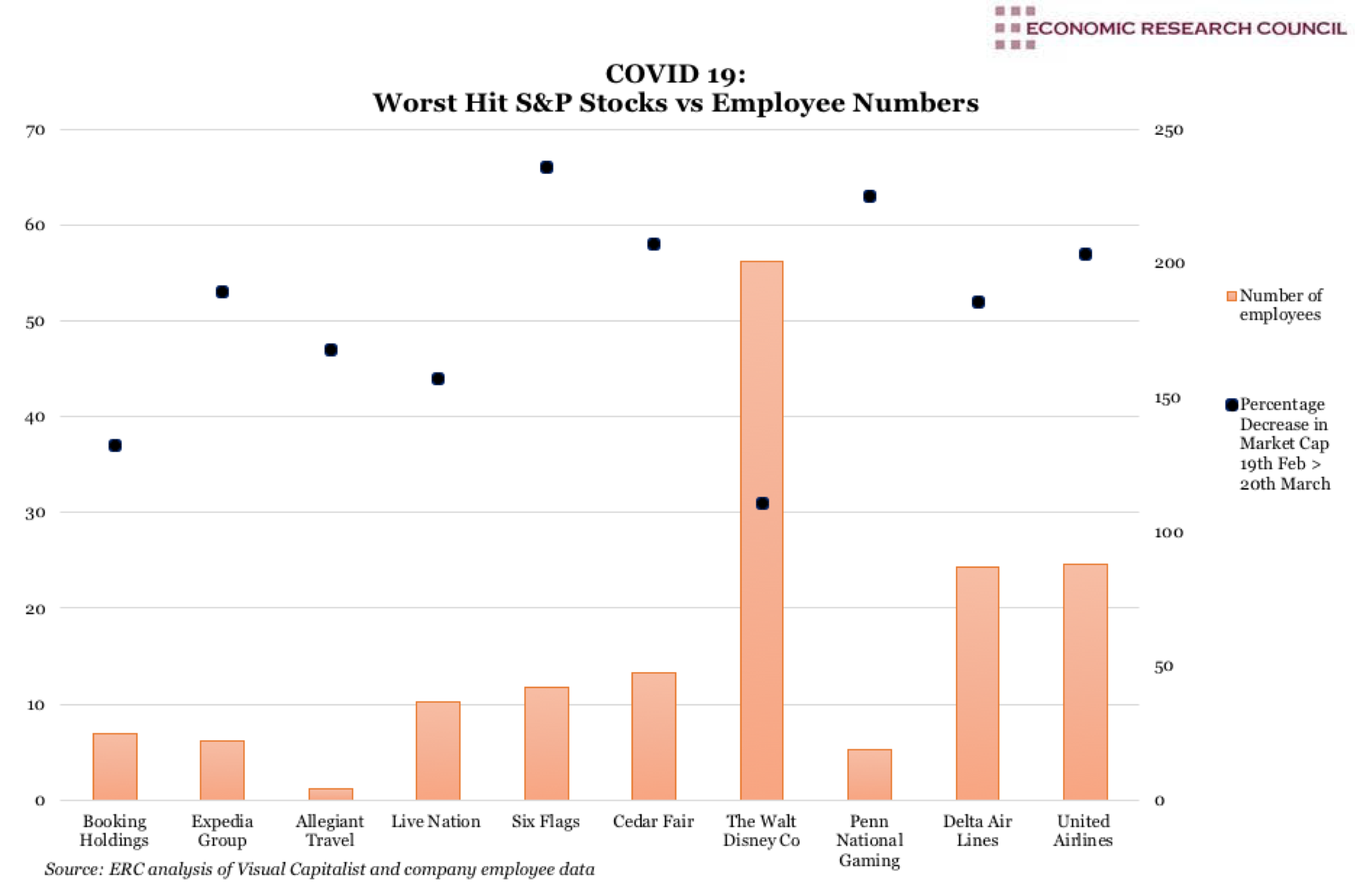 The chart shows the sheer scale of the impact of COVID 19 on the bookings, entertainment, airline, cruises and hotel industries, with a total of $332 billion value wiped off valuations. Now spread over 100 countries, the virus has seen wide-spread closures, bans and restrictions on travel and public gathering. The 116 publicly traded airlines alone have suffered $157 billion in losses. Cruises, once a profitable symbol of wealth and luxury, after 800 plus cases and 10 deaths now find their reputations tarnished as fetid incubators of disease, with just three companies (Carnival, Royal Caribbean and Norwegian) losing half their market cap, some $42 Billion combined. Although providers’ responses have varied, many have moved in order to preserve good will with customers, offering refunds where terms might have otherwise exempted, with severe ramifications. Restaurants and entertainment venues have seen a calamitous level of cancellations, a recovery from which seems ever more challenging. Airlines such as Delta, whose share price fell by over 50%, typify the challenge facing the global aviation industry which ordinarily employs 10 million individuals, moves 12 million passengers daily and contributes $2.7 trillion to the global economy. For platform companies like those owned by Booking Holding (booking.com, Kayak and restaurant platform OpenTable), the ripple effect on all the businesses to whom they direct customers is staggering. Similarly, the prospects for the international hotel industry are desolate.

We have included here the estimated number of individuals employed by each parent company and their entities, which totals over half a million for these ten companies alone. The fate of these employees will depend not just on how the companies are able to manage recovery, but also on the nature of government stimulus packages, specifically to what extent they target the support to individuals or the companies that employ them.

The chart displays the 10 S&P companies whose stocks that have suffered the worst loss in value due to the COVID 19 pandemic. The losses in market capitalisation are shown in percentages (all negative) measured against the left hand axis and cover the period between 19th February and 20th March. The data for the employee numbers is approximate, includes both full and part time workers and is displayed against the right hand axis in thousands. The employee data originates from individual company reports published between 2018 and 2020.

Last week saw a historic 3.3 million individuals claiming for unemployment benefits in the USA, where discretionary consumer spending constitutes one third of GDP. The sustained and catastrophic impact of the collapse in so large a cohort’s income has been met with many business leaders seeking corporate support from the government. The response to the 2008 financial crash centred on corporate and banking support which was perceived to take precedence over the safeguarding of citizens from foreclosures and unemployment. Following 2008, nearly 10 million households underwent foreclosure while a $1 trillion rescue package was offered to banks and large businesses.

Even among publications on the economic right there are calls for business leaders to show solidarity with workers in taking paycuts or salary breaks. Indeed, airline CEOs have publically stated they will forego at least part of their salaries, but in real terms, these sacrifices are merely symbolic. For example Delta CEO Ed Bastian will work unsalaried for 6 months, but his base salary of just under $900 thousand constitutes only 6% of his total remuneration package of $14.9 million. Boards have long sought to incentivise their executives via the issuing of share-based compensation. Recently much has been made of the US airline industry’s habit of share buybacks, a mechanism that boosts their share price and, by extension, senior managers’ compensation via share options- some have gone as far as to label this legalised insider trading.

A particularly unpopular episode arose when Boeing CEO Dennis Muilenburg spent $11billion on share buybacks and, when dismissed over numerous safety failures and an unbecomingly close relationship with the regulator, was still able to leave with nearly $60 billion. This figure was almost exactly what Muilenburg’s successor then requested from the government in bailout, while refusing to give the state any equity share in return. It is stories such as these that have prompted commentators to demand that any bailout stipulates the extent to which companies are to safeguard their workers.

On Wednesday the US Senate passed the Coronavirus Stimulus bill, with little time for scrutiny. This is perhaps unsurprising, given the scale and urgency of the health, social and economic crisis gripping the United States, as it overtakes China as the jurisdiction with the highest recorded cases of Covid-19. The extent to which the bill and the grants, loans and other support it offers US businesses and citizens are able to hold-back the tide of economic recession, remains to be seen. Importantly for the current administration, it appears to be unprecedented yet decisive action, the kind of presidential behaviour needed if Trump is to win a second term in office.

In the UK, our two biggest airlines, British Airways and Virgin, are also in serious trouble. As London City Airport suspends all commercial and private flights, Manchester City Airport has reduced all flights to operate out of a single terminal. British Airways has told its staff to expect job cuts as it, along with all other airlines, ground the bulk of their commercial carriers. The sector is projected to need at least £7 billion in government bailouts, if it is to weather this storm. With comparable forms of government assistance likely in competing nations across Europe, North America and the UAE, the British government will have little choice but to follow suit. While the terms of such bailouts are yet to be decided, it is likely they will be paid back once flights and holidays return to normal. It remains to be seen how the security of jobs will be ensured. From the employee’s perspective, the Unite union has proposed the taxpayer cover the salaries of staff unable to work during the crisis, and that the government take large stakes in airports and airlines to prevent them from going under.