NextCOVID 19 and Universities
Chart of the Week

Our work, leisure and shopping habits as well as interpersonal relationships have all been subject to seismic shifts in a matter of months. Indeed, what consumers value has changed, so as we enter the inevitably severe economic downturn, retail businesses will have to navigate this transformed 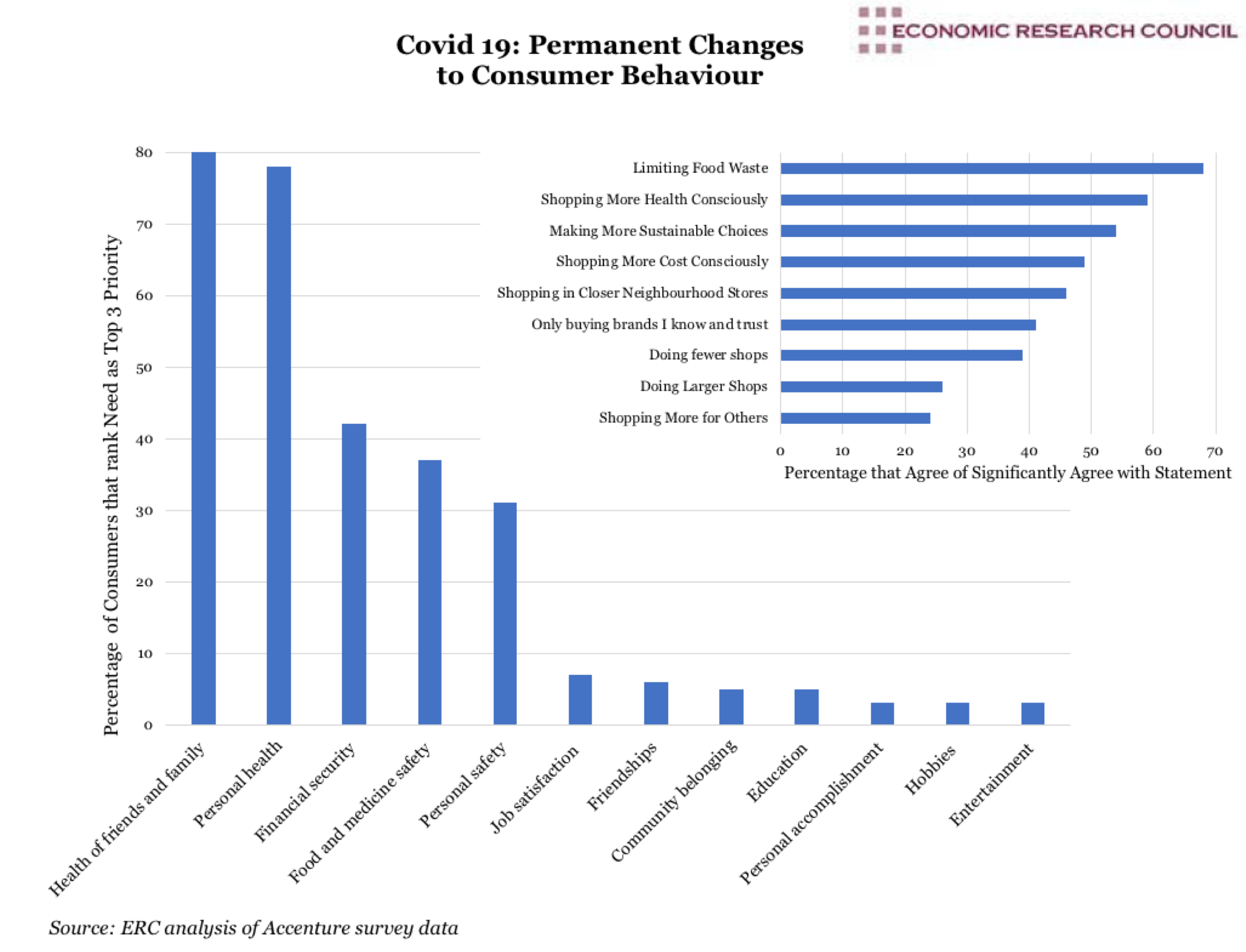 As familiar as the sentiment has become, the impact of the Covid 19 pandemic stands to profoundly reshape many aspects of society, with significant economic consequences. The chart shows that the attitudes, actions and habits of the public are changing, with many new or developing trends becoming entrenched and likely to out-last the pandemic and lockdown. Unsurprisingly, the clearest shift has been towards the prioritisation of people’s basic needs at the expense of more sophisticated but optional desires, such as job satisfaction and personal development.

The chart displays the results of a survey of 3074 consumers in fifteen markets globally. The survey was conducted by Accenture between April 2nd and April 6th. The larger chart displays the percentage of consumers who ranked the statements as within their top 3 priorities. The inset chart shows the combined percentage of respondents who either agreed or significantly agreed with the statements in addition to evaluating these changes to their behaviour and habits as likely to become permanent following the end of the pandemic.

The surge in homeworking, and the attendant technological upskilling of consumers, particularly those previously unable or averse to online shopping, has led to much higher e-commerce uptake globally. During Lunar New Year, Chinese firm Alibaba’s online grocery shopping site experienced a 220% increase in sales over the previous year. Similarly, in the worst hit states in America, subscriptions to online grocer Instacart grew between 10- and 20-fold. 20% of survey respondents who ordered online grocery shops reported that this was their first time using such a service; for those older than 56, the figure was over 32 per cent. Despite demand, the lack of the industry’s capacity to meet customer needs has been highlighted, particularly as smaller retailers scramble to create viable online offerings.

While the pandemic has slowed the global economy, it has accelerated what was already a growing digital economy. Once lockdown is lifted, the differential between high street versus big online retailers will grow more stark than before the pandemic, as the ease, choice and value of online shopping is normalised for a far greater proportion of the population. Along with the accelerated rise in online shopping, some consumers are increasingly buying more locally and more sustainably, focused on locally sourced, artisanal products as well with the aim of supporting community retailers.

As social bubbles grow smaller, high frequency shoppers report that they are 2.7 times more likely to entrench the move towards more local shopping, reflecting the widely-reported heightened sense of community resulting from the pandemic. 55% of respondents said they will seek to prioritise more time with family after the pandemic and 46% of new home-workers believe they will seek to make permanent changes in order to allow more home working.

The great beneficiaries of this have been the technology companies that facilitate this change. This increased sense of connectivity with our communities was felt by 80% of respondents and 88% felt it would last after lockdown has ended. Socially, the average user now spends 51 minutes daily on Houseparty and for business, Zoom has increased its maximum daily meeting participants 20-fold to 200 million. Zoom now leads the business application downloads in 141 countries compared to just 1 before the pandemic.

Another section of the retail industry that was steadily growing before the pandemic were health products– there can be little doubt that these will show greater comparative resilience following the lockdown. ‘Immunity boosters’, organically farmed produce and vegan products will all likely grow in popularity and may be increasingly marketed as a defence against viral outbreak or infection. With many products often lacking in substantive evidence, companies may use woolier terminology over which advertising regulators will need to exercise greater vigilance. For companies, developing a strategy on how to cater to this will become an integral indicator of success.

As with all economic projections, we can only speculate the extent to which those surveyed will stick to their purported post-virus priorities. Nonetheless, an incorporation of health, safety and medical products and services, is likely to become a key innovation target for sales strategists across almost every section of the retail industry. Our work, leisure and shopping habits as well as interpersonal relationships have all been subject to seismic shifts in a matter of months. Indeed, what consumers value has changed, so as we enter the inevitably severe economic downturn, retail businesses will have to navigate this transformed landscape.