According to the Bank of England, the availability of mortgages declined dramatically in the three months ending May 2020 – implying a bigger credit squeeze than in the worst three-month period of the global financial crisis. 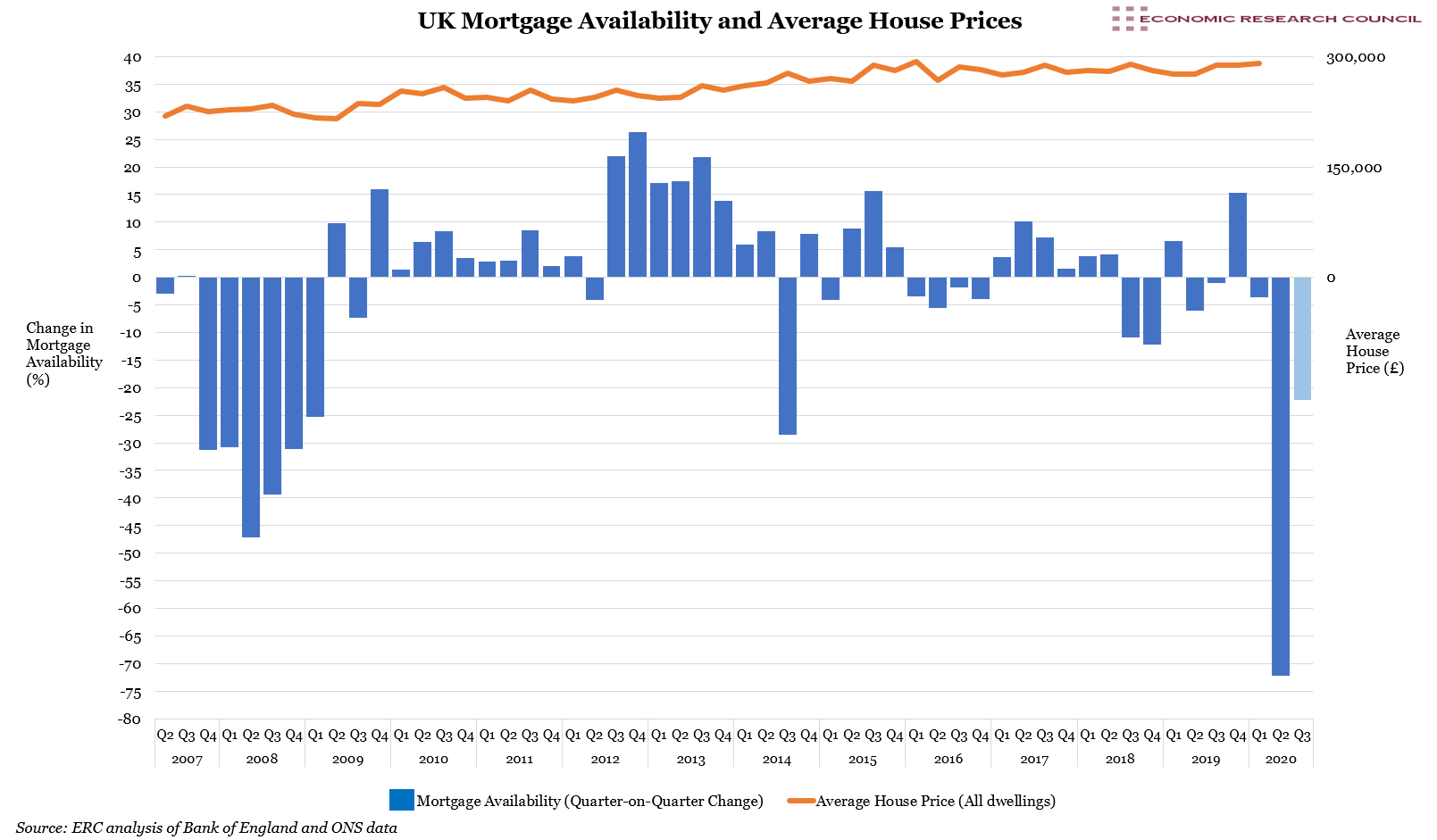 According to a recent survey by the Bank of England, the availability of mortgages declined dramatically in the three months ending May 2020 – implying a bigger credit squeeze than in the worst three-month period of the global financial crisis. Moreover, lenders expect the supply of mortgages to decrease even further in the coming quarter.

While this would normally be a sign of tough times ahead for the property market, this mortgage credit squeeze should turn out to be a temporary phenomenon, rather than the prolonged contraction seen in 2007 and 2008- likely as the pandemic is a crisis exogenous to the financial sector. In addition, there are already indications that a recovery in the housing market is underway. These factors, along with the substantial government support being provided to both mortgage lenders and borrowers as a result of the Covid crisis, suggest that the prospects for the housing market are a lot more positive than in 2007/8.

The blue bars in the chart display the quarterly change in mortgage availability from 2007 until the end of May 2020 (Q2), with the final bar (in light blue) showing the forecast for the three months to the end of August 2020 (Q3). The data originates from the Bank of England’s latest Credit Conditions Survey of UK banks and building societies, conducted between 1 June and 19 June 2020. The change in mortgage availability is measured on the left-hand y-axis, based on a score which weights lenders’ responses by their market shares. A positive score indicates an increase in credit availability from the previous three-month period, and a negative score a decrease.

The orange line tracks average UK house prices from 2007 up to March 2020, which is measured on the right-hand y-axis in pounds. This data is based on a sub-sample of Regulated Mortgage Survey data published by the Office for National Statistics on 20 May 2020.

In response to the question ‘How has the availability of secured credit to households changed in the past three months’, the Bank of England’s survey of lenders recorded its lowest ever score of -72.1%, far worse than the previous lowest score of -45.0% recorded in mid-2008 during the global financial crisis. Furthermore, the situation is expected to deteriorate in the next three months, with a further negative score of -22.2% forecast for the coming quarter. The main reasons given by lenders were their perceptions of the weakening economic outlook, their own reduced appetite for risk and expectations of lower house prices.

However, it is unlikely that this will develop into a full-blown credit crisis in the way it did in 2007 and 2008, when the survey recorded six consecutive quarters of declining mortgage availability. Although the fall in UK GDP will likely be much greater this year than back then, this time we are dealing with a humanitarian and economic crisis, not a banking one. First, lenders’ balance sheets are much stronger than they were in 2007. In March 2020, the major UK banks had Tier 1 capital levels over three times higher than before the global financial crisis, according to the Bank of England’s Financial Policy Committee. They also had £1 trillion of liquid assets.

Second, the significant policy measures taken to support both lenders and borrowers should encourage banks to keep lending to households, so they form part of the solution rather than the problem. There is not the moral hazard that there was before, and banks have been given the economic, political and moral incentives to continue lending, through the provision of both low-cost finance and lower capital requirements. Under the Term Funding Scheme, the Bank of England is offering the banks 4-year funding at interest rates at, or close to, 0.1%, for 10% of their stock of real economy lending, in order to boost their lending activities. It has also reduced the capital they need to set against their lending activities, by cancelling the 2020 stress test (a measure designed to ensure that banks are never as exposed as in the last crisis), and by reducing the ‘countercyclical buffer’ they are required to maintain from 1% to 0% of their exposures to UK borrowers.

Government measures to support borrowers, as well as lenders, should also aid the orderly resumption of the residential mortgage market, by keeping the default rate on loans as low as possible. As well as the extensive financial support being provided to individuals under the Coronavirus Job Retention Scheme, more than 1.9m homeowners have been granted repayment and interest deferrals under ‘mortgage holidays’, which can now be extended from June to October.

As mortgage availability starts to increase again, this will have a positive impact on the residential property market which, perhaps surprisingly, is already seeing a strong recovery in activity levels. The RICS Residential Survey showed a resurgence in buyer demand in June with a net balance of +61% of respondents seeing a rise in enquiries, compared to -94% in May. New sales instructions also grew month-on-month, with a net balance of +42% seeing an increase, compared to -22% in May.  The measure of agreed sales was also positive for the first time since the onset of the Covid crisis, with a net balance of +43% seeing an increase in transactions in June.

The longer-term expectation in the RICS survey was more subdued due to concerns about the economic outlook. In addition, house prices were expected to follow a marginally negative trend over the next twelve months, and especially in the short-term. This is consistent with Nationwide’s house price index, which showed annual house price growth slowing to -0.1% in June.

However, the most recent Rightmove national house price index shows the average asking price of property coming to market in the UK in June was £320,265, a record high, and 2.4% above its pre-lockdown level in March. In addition, the number of monthly sales agreed in England in June was up 15% on last year, based on the Rightmove data – and this was before the introduction of the government’s stamp duty holiday. Rightmove reported that the number of sales agreed in the five days following 8 July, the date the stamp duty holiday was introduced, was up 35% on the comparable period last year. In addition, year-on-year buyer enquiries were up 75% since the start of July.

Finally, the Bank of England’s recent statistics for the number of mortgage approvals showed more than a threefold month-on-month increase, from 9,273 in May to 40,010 in June.  While still well below the long-term average, this is a further sign that both mortgage availability and housing transactions are picking up from their recent lows.

There is obviously still a high degree of uncertainty regarding the shape of the economic recovery, and it remains to be seen if this rebound in the residential property market will be sustainable. However, the evidence so far points to a much more positive outlook for the UK housing market than at the time of the global financial crisis.