NextMay 2020
Chart of the Week

As the world emerges from the pandemic questions arise about how the global economy will be augmented or reshaped by the events of 2020. After the 2008 crash, Brexit and the US-China trade war, the incoming Chief Economist of the World Bank, Carmen Reinhart, describes the pandemic as the ‘last nail in the coffin of globalisation’. So as much.. 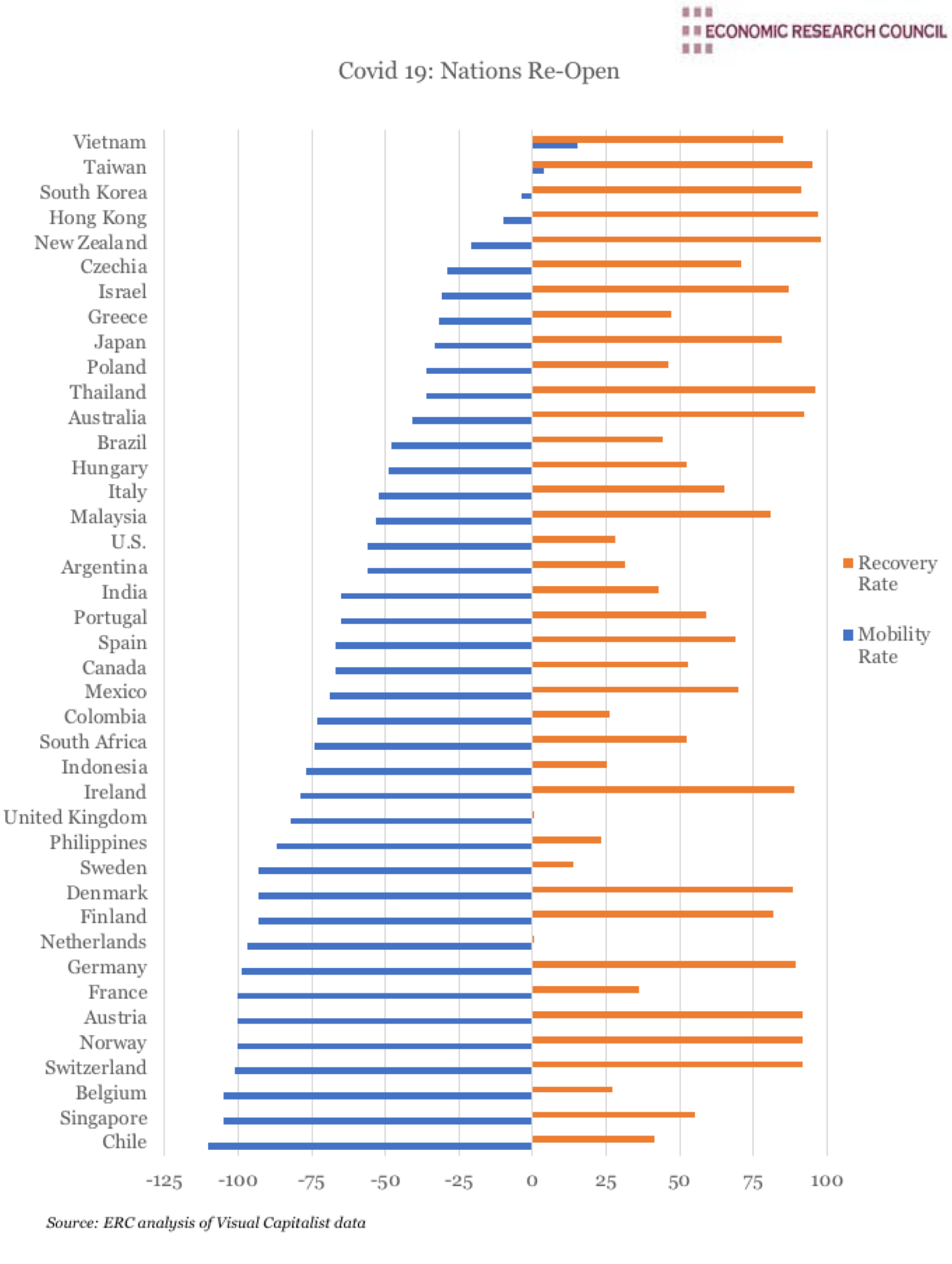 Following the months of economic paralysis caused by the Covid 19 pandemic, it appears the world is beginning to resume movement and activity. The chart generally shows that high rates of recovered people correlates with higher mobility. It’s important to note how fast-developing the situation remains and all nations easing lockdown measures remain on high alert for indications of a second surge that would derail recovery.

What does the Chart Show?

The chart displays 41 economy’s efforts to reopen, alongside how they have fared in terms of Covid 19 cases. Two metrics are displayed: a mobility index and a recovery rate. The mobililty index reflects changes in workplace activity, with activity around residences subtracted, displayed as a percentage deviation from the baseline.  This activity data is derived the Covid 19 community mobility reports, an initiative by Google which aggregates anonymised location history data from individuals. As such, due to the government ban on Google, Chinese mobility data is not included. The higher the mobility rate value, the greater the economic activity (though all but two nations’ values are negative). The recovery rate refers to the number of recovered cases as a percentage of total cases, and is calculated using multiple global and governmental databases including the CDC and WHO. Caution should be exercised as this data is subject to fast-paced developments.

The world’s star performer appears to be New Zealand whose early and stringent response to the outbreak has seen 98% of cases recover and drawn widespread praise. Prime Minister Arden is now in a position to explore novel initiatives to kickstart the economy, including the exploration of a flexible four day working week to boost domestic tourism.

At the more troubling end of the scale, are countries whose mobility rate is high but the recovered case rate remains low. This section of the chart is comprised of countries that have prematurely reduced restrictions or rejected their initial implementation altogether. The prime example of this is global epicentre, Brazil, where Bolsonaro initially dismissed the virus as a hoax, then a ‘little flu’ and made abundantly clear to citizens that the government would not support any changes day-to-day behaviour or work patterns implemented at local level. On May 28th the country had nearly 25 thousand new cases and over one thousand deaths.

Countries that are displaying exceptional caution remain in extremely low mobility, despite high levels of recovery. Italy, which was at one point the worst affected nation globally, is easing out of its 10 week lockdown with extreme trepidation in the hope of bolstering its recovery rate of 65%.

Some nations are suffering with both low mobility and low recovery. The United Kingdom falls into this category with the Netherlands and Sweden, who either chose to pursue herd immunity or failed to implement early or stringent lockdowns during the crisis. More positively, the seemingly low recovery rate in the UK (0.05%) is compounded by a fortnight’s lag in reporting of discharged patients and it appears that the curve of new cases is finally flattening. Despite this, the UK has, for some time, held the highest number of deaths from Covid 19 of all European nations. In the USA, despite cases continuing to mount and over 1.7 million already active, some states have begun the easing of restrictions. In Sweden, contrary to government policy, it is clear that citizens have taken individual responsibility for their protection from the virus, with a mobility rate of -93% reflecting the majority of people’s decision to severely reduce movement.

Countries topping the chart for mobility are predominantly in East Asia, reflecting the earlier onset and peak of the virus as well as more stringent containment measures.

As the world emerges from the pandemic questions arise about how the global economy will be augmented or reshaped by the events of 2020. After the 2008 crash, Brexit and the US-China trade war, the incoming Chief Economist of the World Bank, Carmen Reinhart, describes the pandemic as the ‘last nail in the coffin of globalisation’. So as much as we are all eager for a return to ‘normality’, the truth is that further seismic economic shifts await us following Covid 19.