All the indicators point toward a sweet and sour year for start-ups. While UK tech startups raised €5.3 billion in venture capital funding between January and May 2020, similar to in 2019, the optimism appears to be subsiding in the second half of the year. 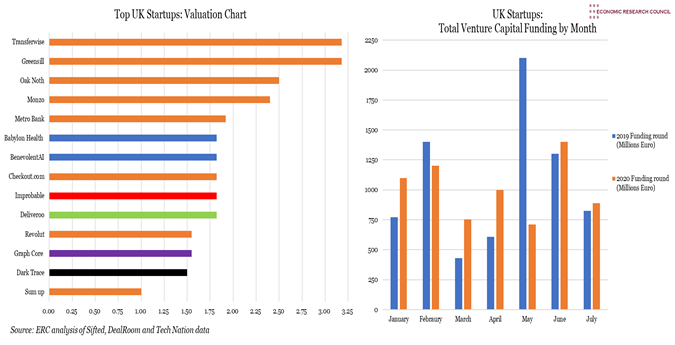 One of the most resilient economic activities throughout the year has been investment in tech entrepreneurship. The numbers so far seem to indicate that this could be a strong year for the innovation sector and even beat 2019 in terms of capital investment. Alongside the change in working practices, there has been a sustained consolidation of start-ups related to these new dynamics. Financial technology, enterprise software, cyber security and gaming have received more investor attention due to the capacity these platforms offer now and as the pandemic continues. Taking into account that the startup environment is usually characterised by aggressive competitor behaviour and continuous struggle to achieve positive margins, it is still uncertain which of these small businesses are most likely to survive and thrive within their respective sectors, beyond the boost offered by the pandemic.

Following the 2008 financial crisis many of the UK startups which scaled up (moving into in a more stable stage) were created. Startups like Greensill, Zoopla or Transferwise were forged against an up-ended financial backdrop and took advantage of the plasticity of the sector. Some of these established businesses served as the catalyst for the now world-leading London innovation hub. Tracking the strengthening of tech entrepreneurship in the UK, the chart displays the latest valuations of the UK’s top start-ups and explores the sustained profits of the sector throughout the 2020.

What do the charts show?

The charts show the valuation (in billions of Euro) of the leading start-ups in the United Kingdom and venture capital funding in a 2019 to 2020 comparison.

On the first chart the names of the leading startups are displayed against the right-hand axis and the valuation of each shown on the x-axis. The colours of the bars differentiate the startups by sector, with fintech in orange, healthtech in blue, gaming in red, robotics in purple and security in black. Some of the valuation dates differ between start-ups, however, none is older than 1 year. The data was collected from the report from Sifted in collaboration with Dealroom. The article is titled: Top UK startups to follow in 2020 .

The second chart shows the change in the amount of funding (in billions of Euro) on a month to month comparison, originating from UK Tech Ecosystem Update report issued in June 2020 by Tech Nation. The blue bars represent the funding for 2019 and the orange bars for 2020.

Why are the charts interesting?

As can be seen on the chart, the biggest leaders of the valuation market are challenger banks; Monzo, Metro, Revolut, Oak North (credit platform) and business-to-consumer start-ups such as Transferwise and Checkout.com. Most of these banks where created five or ten years ago, but the segmentation of their clients has taken time to consolidate. The coronavirus period has proved exceptionally challenging for those banks that depend on interchange fees (when a consumer spends at home or abroad) and premium service accounts. A good example is Monzo, who were forced to shut their customer support office in Las Vegas and furloughed almost 300 employees in the UK- a decision that has ushered in an estimated drop in their valuation of £1.25 billion. There is a similar situation for the business-to-consumer start-ups, where 39% have reported a drop in revenue of over 50% and suffered the consequences of the reduction in global flows of money. The good news might well come from lesser-known banks like Oak North, that mainly focus on middle-sized business loans issued via machine learning solutions, which could find its value bolstered by increased demand in the recovery period following the pandemic.

Unsurprisingly, health related startups such as Babylon Health and Benevolent AI have seen success in 2020. Although it has received a great deal of customers among the young since 2013, Babylon Health, which offers online medical consultation services, has met in the pandemic the perfect conditions for their business. Now, with the coronavirus pandemic there is large scope for a widening client base, relying on the technological upskilling of many people since the pandemic began. The Babraham based startup, Benevolent AI, has dedicated the development of their Artificial Intelligence towards the compilation of large volumes of medical data and the production of novel clinical treatments. They could play an important role in the new exploratory and collaborative stage that COVID has triggered in the pharmaceutical industry. The start-up has set its sights on facilitating the discovery of new drugs via their recent alliance with AstraZeneca, the closest of the big pharma companies to a COVID vaccine.

The gaming, robotics and cybersecurity industries are represented by Improbable, Graph Core and Dark Trace respectively and vary between €1.5 and €1.8 billion in valuation. However, these cutting-edge sectors experience high volatility making their future behaviour uncertain. According to some analysts, initial investor enthusiasm toward AI start-ups is waning because of implementation difficulties and ever-increasing need for more data.

A survey by MMC, a venture-capital fund, conducted in March 2019 found that almost 40% of the start-ups in Europe did not seem to be using any AI at all. This in turn, was seen by one of the most promising business in AI processors, the Bristol based startup Graphcore, as a way for the company to differentiate from their competitors. To this effect, the company has focused their endeavours on the building of AI capacity, releasing their most competitive chip for machine learning in July. This invited an extension in venture capital funding to Graphcore of €150 million from Baillie Gifford, Mayfair Equity Partners, M&G Investment, BMW and even Microsoft, bumping it to a valuation of €1.95 billion in February (although this dropped to 1.5 billion in July).

Dark Trace, with headquarters in Cambridge and San Francisco, develops self-learning software technology for tackling computer viruses and detecting abnormal online behaviour and is preparing to go public by the end of the year. After reporting an addition of more than £100 million from their main shareholders, the business expects to be bolstered by the cyberattacks and malware exposition that increased exponentially during the pandemic.

All the indicators point toward a sweet and sour year for start-ups. While UK tech startups raised €5.3 billion in venture capital funding between January and May 2020, similar to in 2019, the optimism appears to be subsiding in the second half of the year. It has been particularly tough for seed-stage UK start-ups, having experienced a drop in the 80% in funding. Experts in the field argue that the lack of face-to-face working environments might have played a role in triggering investor scepticism toward new entrepreneurs. As Mathew Jones, a senior seed investor explained to the Sifted portal, ‘It’s logical to expect that this challenging macroeconomic environment favours start-ups with proven quality. This means investors reconnecting with those companies and entrepreneurs they have spent time building relationships with prior to the point at which financing is needed.’.

In this context, the government has announced a Future Fund that will offer £500 billion in convertible loans for start-ups and fast-growing business, which will be welcomed by entrepreneurs that cannot access alternative governmental or bank aid. However, this fund has been criticised by the seed-stage sector, mainly because the scheme only allows start-ups that have already raised at least £250,000 over the past five years. Additionally, it is argued that the collaborative nature of the fund (the loans have to be supported by private investors), disproportionately inclines the negotiations to the financier interests and fails to account for the minimum baseline required for emerging businesses. What is clear, is that the Future Fund will be implemented against the backdrop of a short-term cooling of the relationship between investors and entrepreneurs. Whether the government stands to benefit from taking an interest in some of these fast-growing companies, including the rapidly scaling and novel tech sector, remains to be seen.