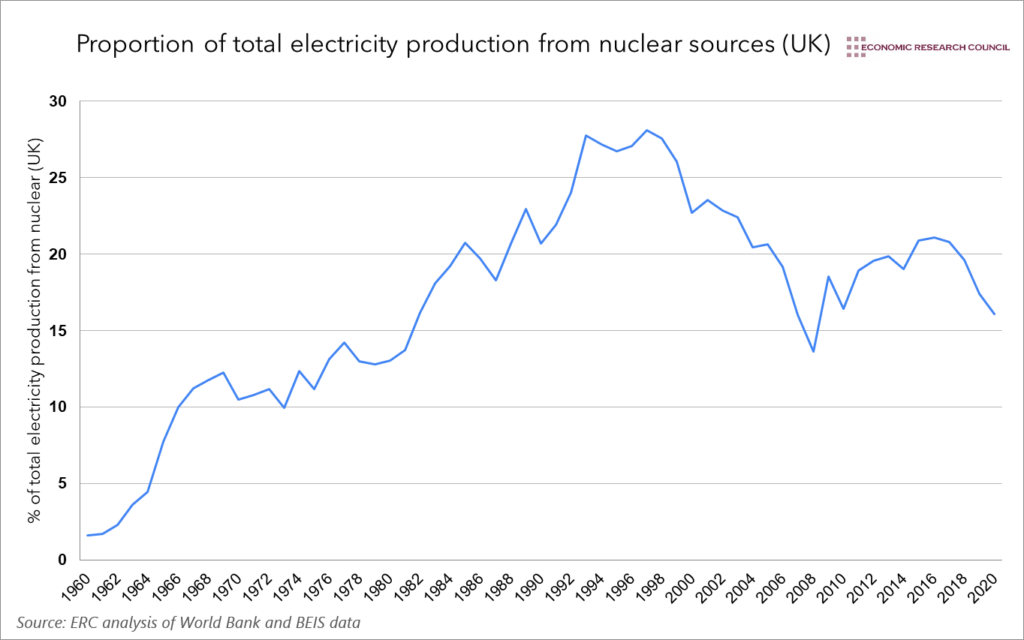 Nuclear energy is a divisive topic. To some, it’s the zero-emission solution to sustainable development: the clean energy source of the future that the warming planet requires. To others, the risks associated with nuclear waste disposal or nuclear accidents are simply too great. Many remain sceptical, with incidents such as Fukushima or Chernobyl still fresh memories for some. For others, the key factor is simply the greater operational costs of nuclear power stations over that of traditional fossil fuel plants. However, as issues such as sustainability and energy independence face the country, perhaps the energy mix requires a review.

This week’s chart displays changes between 1960 and 2015 in the proportion of the UK’s electricity production from nuclear sources.

Following the second world war, nuclear research in the UK was mainly for national defence purposes. The country’s first nuclear reactors were built at the Atomic Energy Research Establishment at Harwell, Oxfordshire. During the 1950s, essentially all of the UK’s energy production came from coal, though through the 1960s to mid-late 90s, the UK’s proportion of electricity generated from nuclear sources jumped from effectively zero to a peak of 28%. This impressive proportion has since undergone a declining trend – the UK currently has 15 nuclear reactors, which produce only around one-fifth of national electricity – the potential of nuclear energy has not been fully realised in the UK for a few reasons.

There is a certain uneasiness that exists today around nuclear energy; the March 2021 Public Attitudes Tracker conducted by the UK Department for Business, Energy and Industrial Strategy (BEIS) found that only 38% of Brits thought nuclear energy provided a safe source of energy. This is partly, due to the infamous nuclear disasters of the past, which still lay heavily on the public’s conscience. The disasters of 2011, in Fukushima, Japan, and 1986, in Chernobyl, Ukraine have both demonstrated the potential for harm that nuclear energy possesses when mismanaged – the former of which led to Germany’s introduction of a total nuclear phase-out plan. As such, three of the remaining six nuclear power stations in Germany closed at the end of 2021, and the remaining stations will close at the end of 2022.

Despite this, some of the most prominent players in the UK energy industry, such as EDF and British Gas, speak to the safety and efficiency of nuclear energy, though they acknowledge the importance of properly maintaining nuclear power stations as they age. Regardless, many people are made uncomfortable by the geological disposal of nuclear waste, whereby radioactive waste is isolated in an underground facility engineered to prevent harmful amounts of radiation from ever reaching the surface. Not all believe in the long-term safety of this, as the BEIS statistic in the paragraph above suggests.

Nuclear power plants also have vast sunk costs. Hinkley Point C, which was originally proposed in 2010, required a budget of £18bn. Today the figure is at £25-26bn. The cost, let alone planning and construction time, may make it seem appealing to instead utilise existing fossil fuel reserves & power plants, rather than investing in nuclear energy. However, nuclear energy plants are significantly more fuel-efficient than fossil-fuel plants; a kilogram of uranium can yield 20,000 times the energy of an equal amount of coal. This greatly reduces the variable costs associated with producing energy from a nuclear power station, which is of great significance currently, as sanctions placed upon Russia for their invasion of Ukraine have led to greatly increased energy prices globally, due to Russia being the world’s largest natural gas exporter. It is hard to justify setting up nuclear power stations as a response to a supply-side shock, though – setting up a nuclear power station could take upwards of 10 years, whilst the cost of natural gas will likely stabilise as the war resolves.

The importance of phasing out fossil fuels, and the UK reaching its climate target of net-zero emissions by 2050 has been made clear. UN secretary-general António Guterres described the findings of the Intergovernmental Panel on Climate Change (IPCC)’s 2021 report as “a code red for humanity” – the negative impact of fossil fuel use on the natural environment becomes increasingly clear year after year; in 2014, England and Wales experienced the wettest winter in almost 250 years – July 2019 saw the UK’s highest daily temperature ever recorded, and as we continue combusting fossil fuels, such weather incidents will only increase in frequency and intensity. Nuclear energy is an avenue of satiating some of the demand currently met by fossil fuels and may enable a reduction in overall fossil fuel consumption.

Leading the way for nuclear energy in Europe is France, wherein around 70% of energy demand is met by nuclear sources. The country generates over €3bn yearly from being the world’s largest electricity exporter, and 17% of this total energy is derived from recycled nuclear fuel, only further increasing the sustainability of the French nuclear fleet. Interestingly, and similarly to the UK, French government policy aims to reduce nuclear energy’s share of national energy production by 20%, to just half, by 2035. Whilst this may initially appear to be a step backwards for nuclear power, it is a firm step forward for sustainability overall, as existing energy demand is expected to be met by alternative sustainable energy sources such as wind and solar. There is hope for the future of nuclear energy in the UK, too: Rolls-Royce’s Small Modular Reactors (SMR) secured grant funding of £210 million, announced by the government as part of the ‘Ten Point Plan for a Green Industrial Revolution’. The proposed SMRs are set to produce the equivalent energy to more than 150 onshore wind turbines, and 90% of the involved assembly processes take place in factory conditions, greatly reducing production costs. The first is set to begin generating electricity by 2029 – not only would this be an extremely sustainable nuclear energy solution, but economically beneficial to the UK too; The SMR programme, by 2050, is forecast to create 40,000 jobs in the UK, and generate £52bn for the UK economy – It is also forecast to export £250bn worth of energy throughout its lifetime – clearly, there is a future for nuclear energy in the UK.