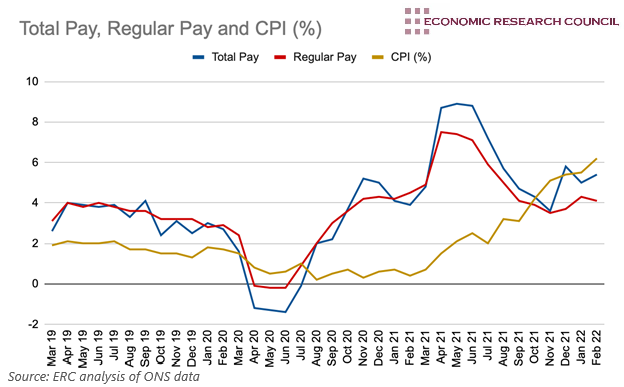 Inflation has been on the rise in recent months. Whilst wages have been growing too, inflation has outpaced wage growth since the end of 2021, having a significant impact on the cost of living. At the same time, the strong wage growth seen in 2020/21 may not tell the whole story.

The chart compares two measures of wage growth with CPI inflation. The blue line denotes total pay, whilst the red line excludes bonuses from this, showing regular pay. All data is sourced from the ONS.

The chart above shows that inflation has largely been outpacing wage growth since the last quarter of 2021. This contrasts much of the period since the start of 2019, with CPI standing 2.2% below both total pay and regular pay on average through the period.

In the three months to January 2022, total pay in the UK grew by 4.8%, with regular pay growing by 3.8%, when compared with the same period in 2021. In the same month, the increase in the Consumer Price Index was 6.2%, indicating that while wages are rising, price increases are currently outpacing this growth. The chart shows that in the year leading to the onset of the pandemic, both wage growth and inflation did not drastically vary and were much lower compared to our recent experience.

There are a number of factors that have influenced the change in both wage growth and inflation in recent years. During the pandemic, when the furlough scheme was in place, weekly earnings fell as the government initially contributed 80% of workers’ wages. The subsequent increase in total and regular pay is somewhat misleading, however. Rather than indicating a buoyant labour market, the increase was instead due to compositional effects, as the number of low paid jobs fell significantly during this period, deceptively pushing average pay up. Declining starting pay and pay freezes during pay settlements support this view. However, as the furlough scheme drew to a close in 2021, wage growth began rapidly increasing, remaining above its pre-pandemic rate. This was also due to recovering employment levels. The labour market has been tightening since the start of 2021, with unemployment falling from 5% to 3.8%. In addition to this, the number of vacancies per person unemployed has risen to new highs. Both of these factors indicate higher demand for labour than the supply available, inevitably leading to higher wage rates.

Despite inflation now running at 6.2%, wage growth appears to be decreasing, exacerbating the squeeze on the cost of living that millions of people are facing. The key question is whether high inflation and a tight labour market prompt a wage spiral, resulting in a protracted period of high inflation, further squeezing living standards.