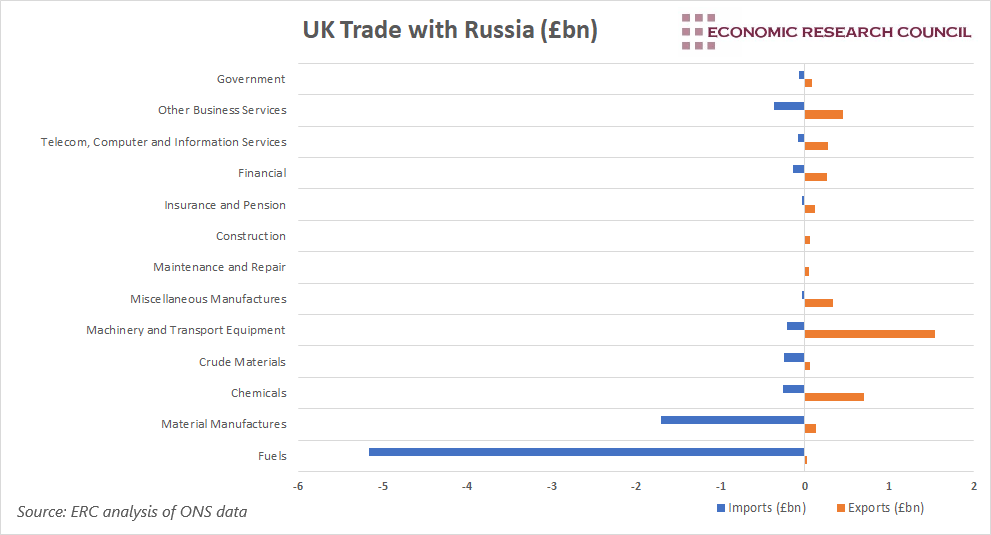 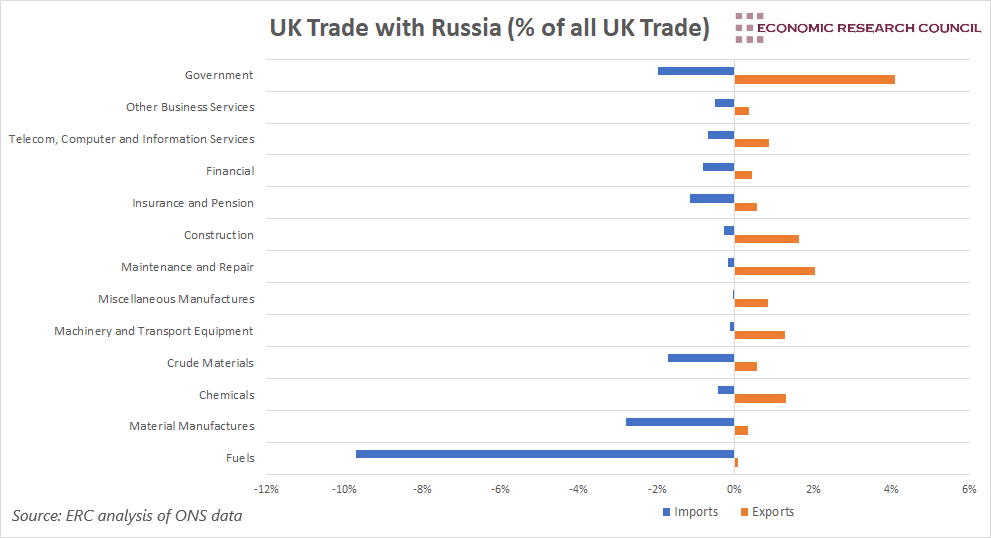 The war in Ukraine has created and exacerbated economic challenges through all corners of the world. However, the effect on individual nations has been tempered by the extent to which they rely on trade with the warring nations. This week’s chart analyses the UK’s trade with Russia over 2021. Whilst fuel imports might prove slightly difficult for the UK to replace, other sections of the economy are not very reliant on trade with Russia.

The charts above display two measures of the UK’s trade with Russia last year. The first chart shows the absolute values in billions of pounds, whilst the second chart displays the percentage of the UK’s total trade in each respective category. In both charts, the UK’s exports to Russia are represented by orange bars and positive values, while imports from Russia are represented by blue bars and negative values.

The western world is currently imposing a range of sanctions on Russian individuals and businesses. Recent weeks saw the Ruble tank, as well as the downgrading of Russian debt by several rating agencies. But what does this mean for the UK? This week’s chart assesses the importance of Russian imports and exports to the UK economy.

Fuel imports from Russia are an obvious starting point, as the UK spent £5.2bn on these last year.  This amounted to just under 10% of all fuel imported to the UK. Oil formed 78% of this figure, amounting to roughly £4bn. This means that 13% of all oil imported to the UK came from Russia last year, with the Netherlands, Norway, and the USA being the only countries that the UK imported more from. The UK government recently announced that imports of Russian oil will be phased out by the end of the year. This leaves a notable gap in the UK’s oil supplies, which may be met by further drilling in the North Sea.

Whilst talk has focussed on Europe’s reliance on Russia’s natural gas, the UK does not share this problem to the same extent. Only 5% of the value of imported gas to the UK came from Russia, with the vast majority being imported from Norway.

Materials used in the manufacturing process are the second largest category of goods and services imported to the UK from Russia, with £1.7bn worth coming into the country last year. Of this value, 86% were non-ferrous metals accounting for 8% of all non-ferrous metal imports to the UK. Russia is a key producer of metals such as aluminium, nickel and copper, and these metals are crucial to the automotive, aerospace, mechanical engineering, and construction industries. Recently, the London Metal Exchange’s copper committee recommended banning Russian metal from the exchange. Whilst this has not yet happened, the European Union has prohibited the import of certain iron and steel products. Due to this, as well as concerns that payments to metal suppliers could be impacted, metal prices have surged in recent weeks. Despite Russia only supplying just over 2% of the imported materials used in manufacturing in the UK, the impact of rising metal prices will surely impact UK producers, and lead to higher prices in the goods produced.

The largest UK export to Russia in 2021 was machinery and transport equipment when £1.5bn worth was sold to Russia. £800m alone was in mechanical machinery. Whilst these exports have not been directly hit as a result of Russian sanctions, their value will likely fall in the near future. Western sanctions on Russia have essentially killed foreign investment into the country, meaning capital expenditure is likely to fall in Russia over the coming years. The UK’s machinery exports to Russia will feel the effect of this. Despite this, only 1.3% of the UK’s machinery and transport exports end up in Russia, meaning reduced demand will only have a negligible effect on the industry.

Excluding fuel, the impact of the war in Ukraine on the UK’s trade is relatively negligible. Whilst the UK imports and exports billions of pounds worth of goods or services in particular categories, these figures are only a small blip relative to the trade in those categories with the rest of the world. Any reduction in trade with Russia due to the conflict will only have a negligible impact on overall UK trade. However, whilst the picture on trade is positive, the same cannot be said for other areas. The conflict has the potential to significantly impact production costs for firms, as it already has done to a certain extent, meaning price rises are likely to continue.