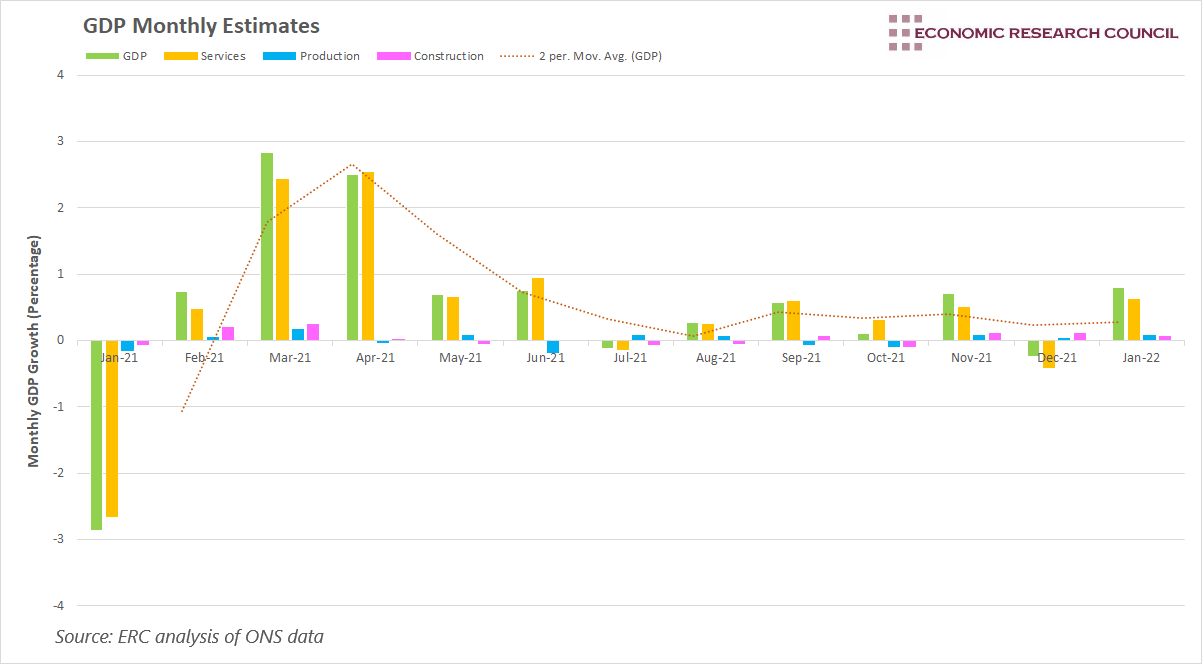 Gross domestic product grew by 0.8% in January 2022 and is now 0.8% above its pre-coronavirus pandemic level. All sectors of the British economy contributed to this increase with services seeing the greatest gain and surpassing pre-coronavirus levels.

This chart, based on data sourced from the ONS, shows a trend in increasing GDP over the past year. Although January of 2021 was particularly bad with a negative 2.8% hit, the economy was quickly able to rebound over the course of the next two months. Since March of 2021, every month but July and December has seen steady growth. The two negative months have had almost no effect on the general trend of consistent and steady growth.

The COVID-19 pandemic had a huge negative impact on the British economy. It was predicted that January would show a meagre 0.1% gain, however, GDP stands at 0.8% above pre-pandemic levels.

Strong gains in all sectors demonstrate the resilience of the British economy going into 2022, even with the brief Omicron variant hiccup in December. Production and construction are up 0.7% and 1.1% respectively, but manufacturing is still down 1.6% overall from its pre-coronavirus level. Construction has seen its third month of consecutive +1% growth. The main driver of this growth is the service sector, which has now eclipsed its pre-coronavirus level, thanks to a large uptick in customer-facing services of 1.7% and an even greater increase in food and beverage activities of 6.8%. The subsections in services with the highest growth were human health and social work activities (+15.1% from last year), whilst 6 of the 14 subsections surpassed their pre-pandemic levels.

The British economy has been performing very well over the course of the past year. The only two periods where GDP went down, albeit slightly, were when the Delta and Omicron variants peaked in July and December respectively. However, it seems that the booster jab and lifting of Plan B restrictions has renewed people’s optimism going into 2022. Even the industries hit particularly hard in December, like retail and restaurants, have been performing well in the new year. Despite supply chain issues and a shortage of lorry drivers, manufacturing output is still up for the third month in a row. Big gains in retail suggest many are shopping in-person once more, and pub sales are up around 9% from last month. Pub and club owners are excited and feel encouraged by early signs of recovery. CEO of Diageo Ivan Menezes suggested, “what we see around the world is that as restrictions ease, consumers are really waiting to get outside the home to socialise”.

Menezes expects business to reach 90% of pre-COVID levels in the near future. Activity in the food and drink sector rose by 6.8% showing consumers going back to pubs and restaurants, whereas in December, the Omicron variant had caused an 8.1% dive.

The early signs of a sustained recovery show promise. However, many experts are beginning to suggest that the ongoing conflict between Russia and Ukraine could stall the recovery. Inflation, the cost of living crisis, and already rising energy prices are all expected to get worse as a result of the war. Many poorer people are having to choose between heating their homes and eating quality food due to increased natural gas prices. The war on the eastern front is already sending price shocks to markets that rely on the importation of Russian oil and gas. Domestic energy prices will certainly continue to rise, but the overall effect on the trajectory of the UK economy in the long term remains uncertain. February and March will probably be good months showing solid growth indicators, but a combination of skyrocketing inflation, poor wage growth, and tax hikes may just prove to be too much for Britain to handle this early in the year. The middle of the year may see a deep lull, and whether the economy is strong enough to push past it remains to be seen.