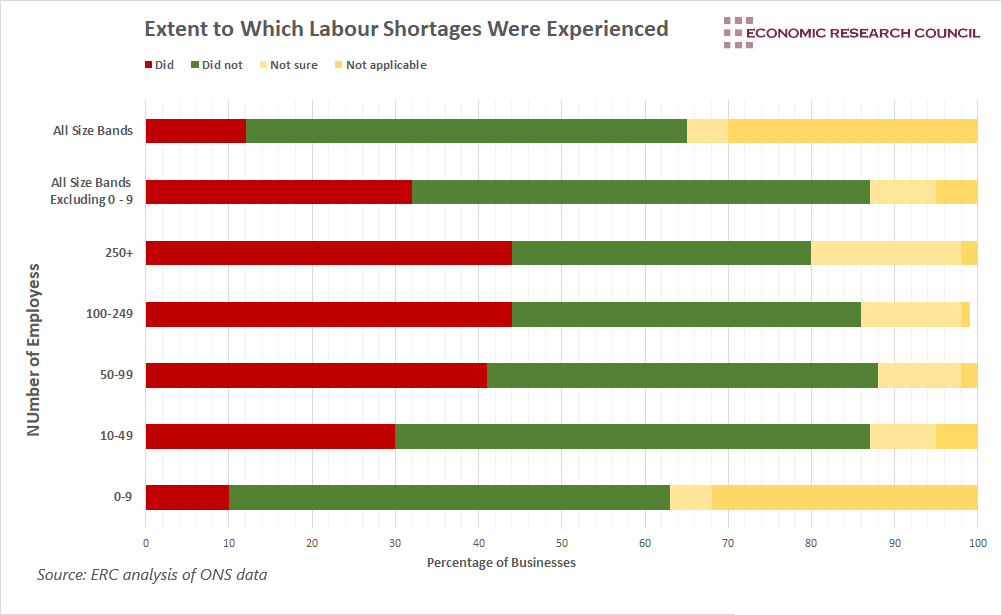 Excluding businesses with fewer than 10 employees, a third of UK businesses that had not permanently stopped trading reported worker shortages in late February 2022, down from 37% in mid-October 2021. Businesses in recent months had to deal with the major difficulty of hiring and retaining workers, in the current post-pandemic economy, but the latest data suggests that the job market still exhibits strength.

The chart utilizes Office for National Statistics data that displays the proportion of businesses that are facing labour shortages in the UK. The data is split based on the size of each business. The chart highlights how fewer businesses are having trouble finding employees to fill positions than those that are not, and that small businesses reportedly experienced labour shortages the least.

Research done by tax and accountancy firm BDO highlights this trend and claims that the labour market hit a two-year high in February. BDO announced that the employment index hit 110.75, which makes for the fourth consecutive month of growth.

As the government eased COVID restrictions, business optimism saw a huge boost. With employees going back to work and businesses fully reopening and returning to usual operations, many have found it necessary to hire more employees to better handle increased demand.

Research by a self-described “people-first” HR platform Lattice found that “59% of HR leaders have had to create better policies around flexible working to attract and retain talent” in an employee-led market. According to the survey, a staggering 59% of workers said that the pandemic made them more likely to quit their jobs. Those in Gen Z have been hit the hardest by the pandemic with just over a third saying that they felt motivated to quit their job, which is more than twice the proportion of older employees. Only 10% of full-time Gen Z employees feel comfortable that they could find another job. Over half of HR leaders say that there aren’t enough qualified people to fill the open positions and that candidates are in an especially strong position to bargain for higher wages. BDO’s optimism index increased almost a full percentage point in the past month, and with a historically strong labour market, people have compelling incentives to participate in the workforce. With labour shortages quickly shrinking, the economy appears to be well on the road to recovery.

However, it’s possible that this optimism will be fleeting. Given the ongoing war in Ukraine, climbing inflation, steep energy prices, and the higher cost of living, we may see people’s attitudes quickly begin to change over the next month or so. Inflation is still outpacing wage growth, and the cost of living continues to scale, as rising energy prices are exacerbated by the Russia-Ukraine conflict. The absence of post-pandemic restrictions and a strong labour market may not be enough to sustain the recovering economy.