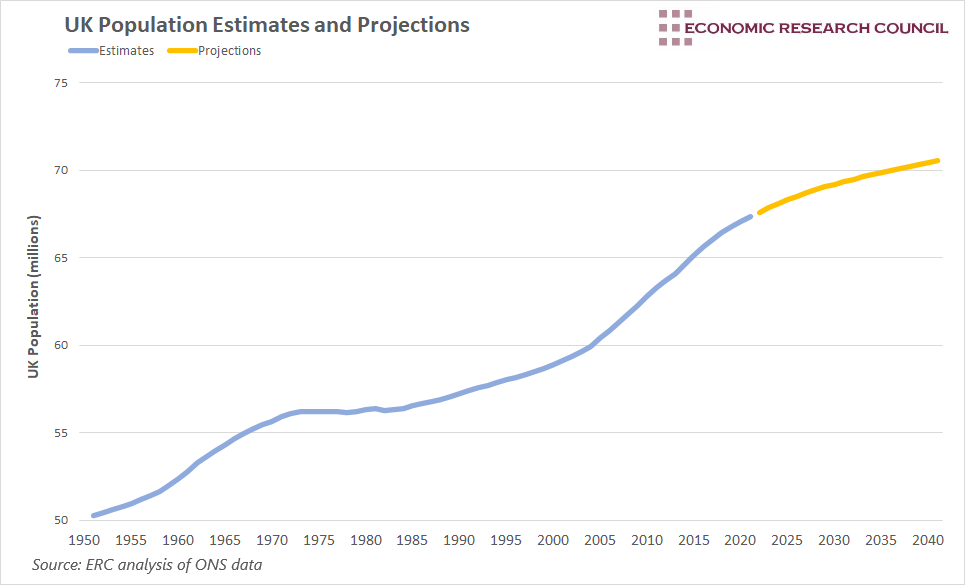 The UK experienced population growth in a somewhat cyclical manner during the 20th century. The determinants of this growth have changed over time, indicating slightly different patterns of growth in the future.

The 1950s and 60s clearly show the effect of the ‘baby boomer’ generation. Whilst this is often attributed to the end of WWII bringing about economic opportunities and facilitating increased fertility, studies show that the economic effects are inconclusive. Instead, the seeds of the boost in population seem to have been sown early in the 20th century. Greater family sizes in cohorts born during the Great Depression, as well as increased nuptiality and people marrying at a younger age, increased fertility levels around the 50s and 60s, leading to a net increase in the UK population.

Between the 1970s and late 1980s, the UK experienced relatively stagnant population growth, before a strong and sustained increase. The number of births fluctuated slightly during this period but remained around a mean of 750,000, whilst deaths only slightly decreased. Due to this, natural change has played only a minor part in UK’s population growth since the late 80s/early 90s. Instead, net migration is the driving force behind the UK’s growing population up to today. In the ten years up to 2020, immigration to the UK fluctuated between 500,000, and 750,000 people per year, whilst emigration from the UK usually stood below 400,000 per year. This sustained net inflow has allowed the UK population to increase at a relatively fast and sustained pace over the last 30 years.

The keen-eyed of you may spot a slight kink in the chart in 2016. Here, the vote to leave the European Union had an immediate impact on net migration, despite the UK still being in the EU at that point. Net migration fell from 300,000 people in June 2016 to 200,000 in June 2019. The split between immigration and emigration here was roughly equal, indicating a reduction in the number of people coming into the UK and a roughly equal increase in the number of people leaving the UK.

Over the next 20 years, it is expected that the population will grow at a far lower rate than seen in the last 30 years. By 2025, it is expected that the number of deaths in the UK will exceed the number of births; only the third time this would have occurred since 1900 (with the first being 1976 and the second due to Covid-19 in 2020). The main reason for this is the fact that those born during the baby boom period will reach older age. Nevertheless, the population is still expected to grow over this period due to net migration. Whilst net migration continues to fall and is expected to do so before levelling off in 2026, the magnitude of net migration simply exceeds that of natural change. As such, it seems that population growth in the UK will largely be determined by net migration in the medium term.