NextExiting the Lockdown: The Range of Impact on GVA by Sector
Chart of the Week

Much as other industries including retail, aviation and automotive are making their case to the government for support following the pandemic, Universities UK has similarly petitioned government for a Coronavirus rescue package… 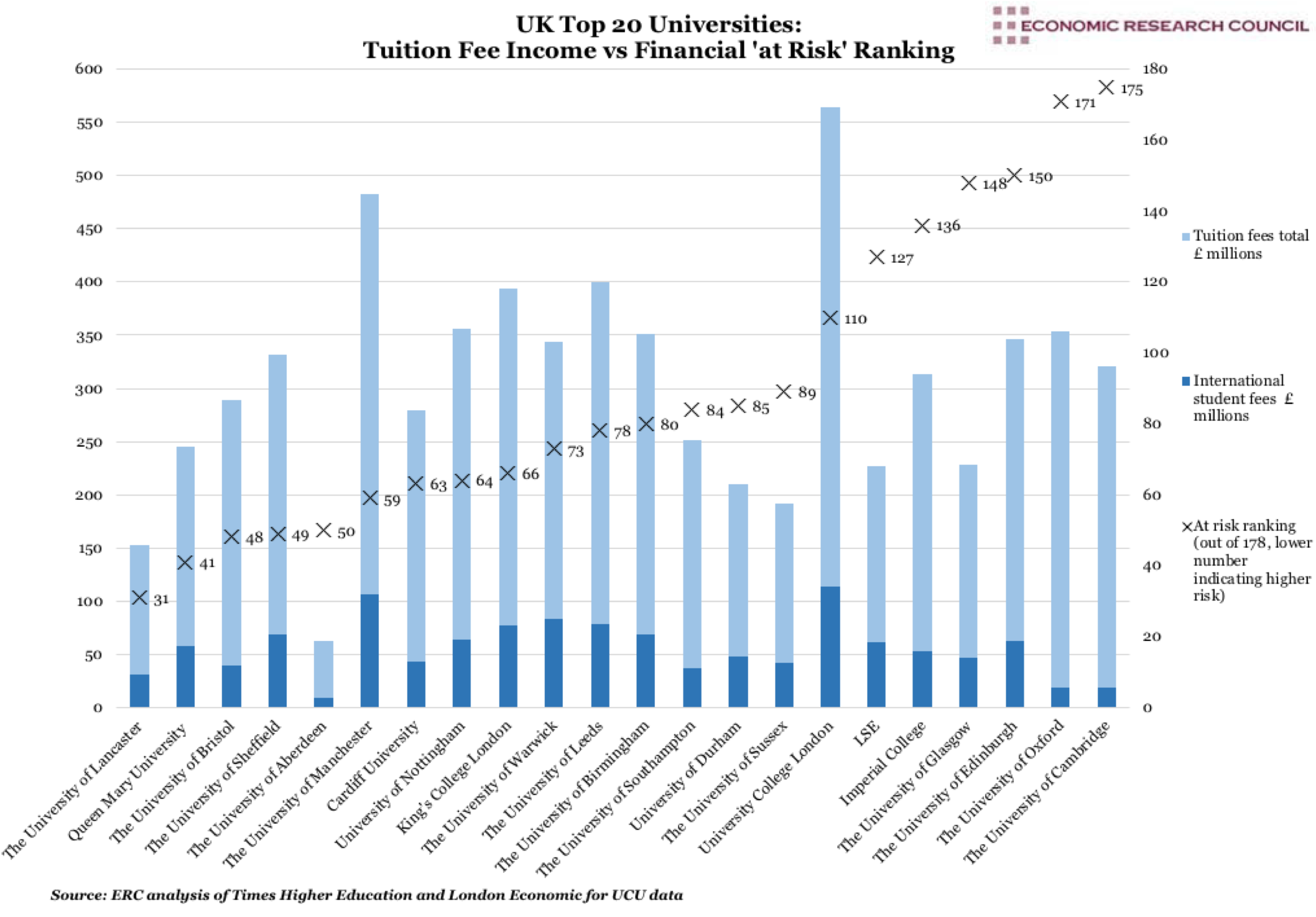 The chart shows that of the Times Higher Education top-rated 20 UK universities – nearly three quarters find themselves in the top half of the financial risk ranking. The chart shows that Oxford and Cambridge are outliers in both the risk to their finances from the pandemic and the proportion of their income drawn from international students. Two surveys have been used to compile this analysis; one via UCAS conducted between 27th and 30th March, which focused on domestic applicants, and a second from the British Council conducted between 27th March and 3rd April which examined the reduction in international applicants. Although much uncertainty remains, the authors of the data have used these surveys to extrapolate that there will be a 47% reduction in overseas applicants and 16% in domestic applicants, which take into consideration the balance between undergraduate and postgraduate, as well as full and part time. With such a catastrophic drop in course uptake, they further the likelihood that the sector could experience up to 30,000 lay-offs and a loss of tuition fee income of £2.5 billion, although this relies on a uniform impact across the university hierarchies.

The chart displays the results of London Economic analysis undertaken for UCU examining the financial risk to universities posed by the Covid 19 pandemic. London Economic ranked the 178 universities in order of greatest financial risk, taking into consideration a number of factors including their existing financial position and reliance on tuition fees, both domestic/EU and international, for income. This rank position is displayed by the black crosses against the left-hand axis. The institutions’ income from tuition fees is measured in £millions by the blue stacked bars against the right-hand axis, with that from international student fees in darker blue.

Much as other industries including retail, aviation and automotive are making their case to the government for support following the pandemic, Universities UK has similarly petitioned government for a Coronavirus rescue package. Universities form a significant sector of the UK economy, generating over £95 billion and employing the equivalent of 940 thousand people full time. This contribution is independent of the public good they provide via the development of skilled people, cutting edge research and fueling growth via multiplier effects.

We have only shown the impact on the UK’s top-rated universities in our chart, but much variation exists within the higher education sector, which can be broadly split into four segments: Oxbridge, Russell Group plus, post 1992 universities and others. By and large, the Russell Group and Oxbridge are made up of predominantly wealthy institutions, with sizeable reserves and better able to draw income from successful alumni as well as fees. It is the post- 1992 universities who appear at greatest risk, particularly those with steep costs, strict debt and high exposure to international fees.

As with many employers, universities have been part of the trend towards the casualisation of contracts where temporary, fixed term and zero-hours contracts are used ever increasingly. With Bristol, Newcastle and Sussex universities already announcing individuals on these contracts will be the first to be cut, it is likely that many others will follow suit. However, as universities compete ever more for students, many have sought to increase their Research Excellence Framework score via the retention of increasing numbers of top academics on salaries of £100 thousand or more. This is a source of contention as many universities do have reserves they can draw upon to weather the reduction in student numbers, if it is temporary. As with the bail out of any organisations following the end of the pandemic, tough decisions lie ahead for government, who must balance the freedom they afford recipients of government funds to apportion funds where they see fit, with responsibility for these organisations’ workforces. It is of little value offering rescue packages to institutions who use it to court and subsidise international students, while leaving (often the most precarious) staff out of work and in need of further government support.