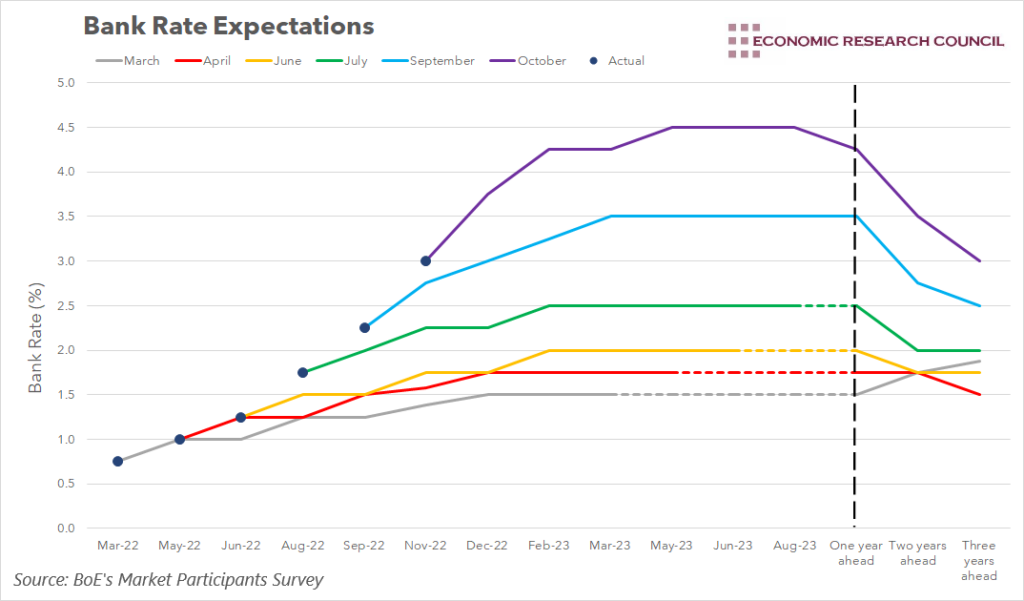 This week’s chart goes a long way to express the substantial shift in the outlook for the UK economy that has occurred through 2022. Before assessing the trajectory of rate expectations, an interesting point that the graph displays is the Monetary Policy Committee’s unwillingness to deviate from immediate market expectations when setting the Bank Rate. At each Monetary Policy Committee meeting, the Bank Rate was set at the level that market participants expected, according to the most recent survey. Whilst this may be interpreted as the markets displaying some level of collective wisdom, it can also convey the tricky position of the Bank of England in times of uncertainty. Taking a bold decision to deviate from market expectations may in turn cause panic within the markets, reducing the impact of any Bank Rate decision.

Assessing the chart also highlights the point where uncertainty began to take hold. Towards the start of the year, market participants were successful in predicting the Bank Rate that arose in the first two meetings after expressing their expectations. Since then, they have only been successful in predicting the rate decided upon at the next meeting. These expectations have undershot the actual trajectory of rate rises every time. It is no coincidence that this is the case. Towards the start of the year, inflation was still being discussed by some as transitory, whilst supply chain issues were the most common explanation for rising prices. The war in Ukraine was anticipated to end quickly, at which point the global economy would return to some semblance of normality. The undershooting of Bank Rate expectations through 2022 simply highlights the unwinding of these beliefs, with inflation becoming more and more baked in.

This point is also important when assessing the difference between future expectations moving from March to October. As we move from earlier to more recent expectations, the trajectory of Bank Rate expectations becomes steeper. Between March and June, market participants expected a slow rise in rates over time, which in theory, would softly bring inflation to target. We started to see a movement away from this notion with July’s expectations, with much more urgent rises in the Bank Rate expected in September and October. The timing here is no coincidence. The rate of inflation for the three months leading up to and including July stood at 9.5%, compared to 7.4% in the previous three months, so it is understandable that expectations would rise accordingly. Whilst September’s expectations were gathered at the start of the month and largely reflect persistent inflationary pressure, the steep rises in rates expected from October is a direct consequence of the mini-budget as it was predicted that rate rises beyond those previously expected would be needed to combat inflationary fiscal policies.

Finally, another interesting point of comparison between expectations towards the start of the year and now is the long-term trajectory. In March, market participants largely expected rates to continue rising in the medium term, though their expectations never exceeded 2%. More recent expectations show that market participants believe rates will peak sometime next year, before falling in the years ahead. There seems to be an acknowledgement that whilst high-interest rates are necessary to address the current inflationary pressure, returning to a high-interest rate environment for a sustained period is very unlikely. The mortgage debt to income ratios of households would certainly be a limiting factor on the magnitude and longevity of future increases to the Bank Rate.