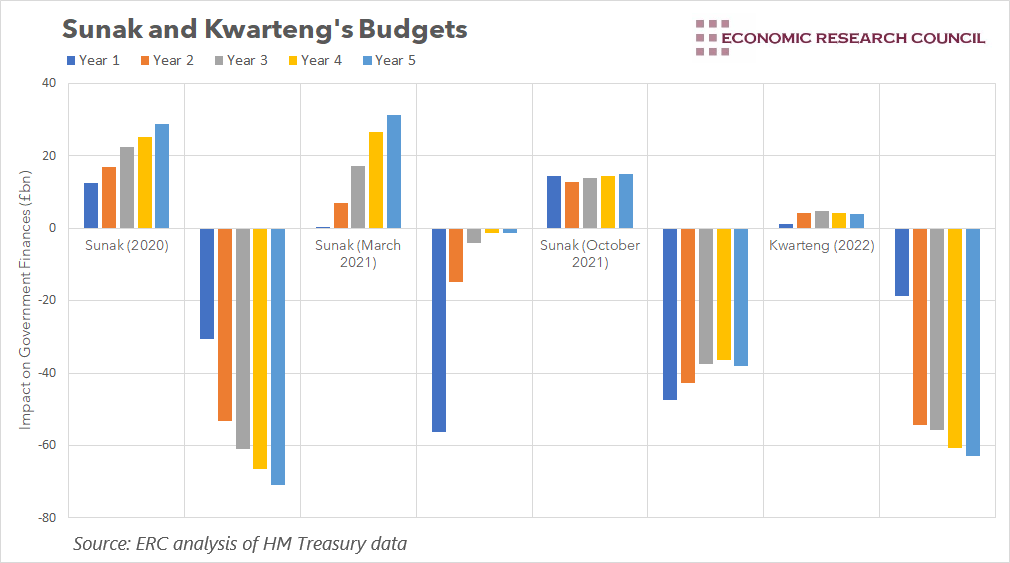 Kwasi Kwarteng announced a range of fiscal measures, which set a clear tone for what we are likely to see from the current government. These measures largely consisted of tax cuts. Whilst they are likely to hurt government finances, their announcement clearly shows the priority that this government places on supply-side policies.

The chart shows the projected impact of recent budgets (along with today’s “mini-budget”) on government finances. The financial impact is shown for the five years following the budget and is split between policies that add to or detract from government finances. Each budget can be identified by the chancellor who delivered it, with policies increasing finances above their name, and those detracting from finance to the right of their name. The chart does not include any announcements made before each budget. All values are in billions of pounds.

Whilst technically not a budget, Kwasi Kwarteng delivered extensive amendments to the government’s fiscal policy when he stood in parliament earlier today, introducing the largest tax cuts seen in 50 years.

Several points stand out from the chart. Firstly, the change in direction of travel between Kwarteng and Sunak is clear to see. The revenue generated from the policies announced is projected to be under £5bn in each of the next 5 years. The only time this occurred in a Sunak budget was in the year after the March 2021 budget. In addition to this, the total cost over the next 5 years dwarfs each Sunak budget, with his policies costing around £250bn through this period, compared to the £200bn of Sunak’s most profligate budget in 2020.

There also seems to be a key departure in philosophy between the two. Despite committing to spending vast sums of money, Sunak’s budgets seemed to try to improve the government’s finances in the medium term. In the following 5 years after his budgets, either income was projected to increase as time went on, or the amount spent would decrease over time. In each fiscal year after Kwateng’s budget, the amount that his policies detract from government finances grows.

For a Prime Minister that seems to model herself on Thatcher, seemingly reckless fiscal policy seems at odds with what we might have expected. However, a justification for these measures may come in viewing the mini-budget as supply-side policy, rather than fiscal policy. A large proportion of the spending comes in the form of tax reductions. The temporary increase in NICs from November has been reversed, as has the increase in dividend tax rates. The basic rate of income tax will be reduced to 19% in April, and the additional rate will be removed altogether. The planned increase in corporation tax has also been reversed. Delivering his statement, the Chancellor suggested that “the tax system is not simply about raising revenue for public services… tax determines the incentives across the whole economy”. This quote gives us the biggest indication as to how the chancellor plans to use fiscal policy to conduct supply-side policy, and perhaps leave government finances as a lesser priority. He aims to incentivise businesses to operate in the UK and encourage people to work. He hopes to create the right environment that’ll ultimately support longer-term economic growth.

Only time will tell if these policies achieve that. There have already been remonstrations, with some questioning whether these policies will lead to growth. With regards to the cut in income tax, some have suggested that the higher savings rates of the more wealthy mean that the announced tax cuts could have been better targeted at lower earners to boost growth. The inflationary nature of these policies has also been noticed, with some suggesting the Bank of England may engage in a more radical trajectory of rate rises to counter the inflationary pressure of the mini-budget. Markets also seemed to look unfavourably on the set of policies, with the Pound falling sharply in the aftermath of his statement. Nonetheless, the mini-budget represents a clear departure in economic thinking compared to Rishi’s approach. How it contributes to inflation and economic growth may be a defining factor in Liz Truss’ premiership.