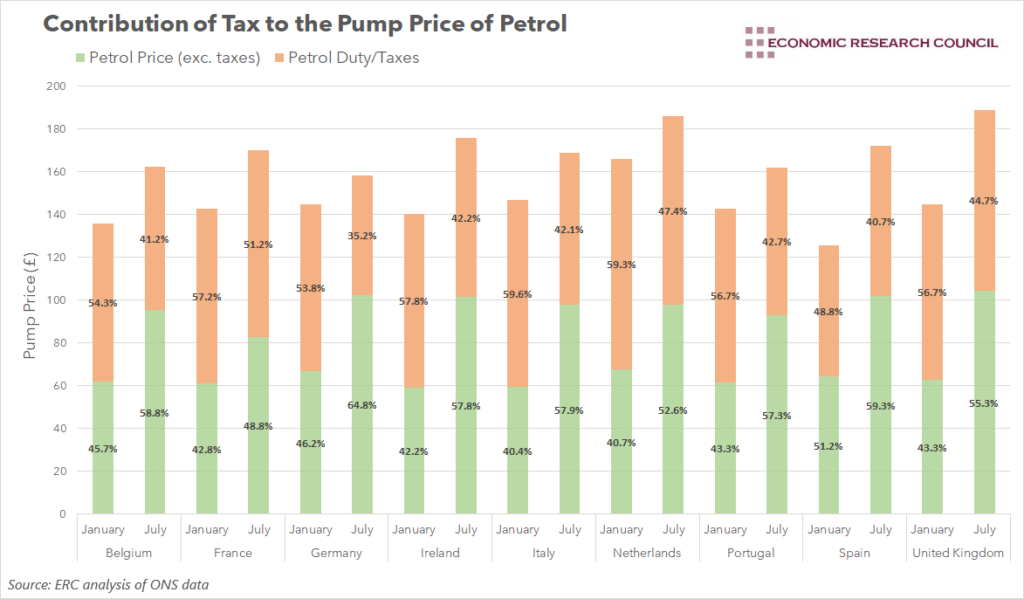 This year has seen rising fuel prices across all of Europe, however, countries have not been united in their approach to dealing with it. Whilst the UK may not have been as generous as other nations, their reductions in tax duty may not necessarily have had desired effects. Nonetheless, there is scope for further action from the UK, particularly on the magnitude of the tax cut.

The chart displays the pump price of petrol, split between the product price (green), and the tax/duty levied on petrol (orange). Monetary values, in pence per litre, can be read from the left-hand axis, while the product price and tax as a percentage of the total pump price are displayed on each corresponding bar.

As the cost of living continues to bite, people are making tangible changes to their lifestyles in an effort to ease the pain. The ONS has already highlighted that millions of people are spending less on non-essential goods, using less gas and electricity, and cutting back on non-essential car journeys. Now, the AA has found that a quarter of drivers rank good fuel economy as their number one priority when buying a car, and 87% place it in their top three.

This is all as a result of the sharp rise in petrol and diesel prices we have experienced since the start of 2022, with petrol rising from around 145p per litre in January, to around 191p per litre in July. These, in turn, reflected the sharp rise in the price of crude oil in the aftermath of the pandemic. In response to this, the UK Government cut fuel duty by 5p per litre in March, arguing that this reduction would save consumers £2.4bn over 12 months, and save the average driver £100 a year. Nevertheless, in July UK drivers ended up paying among the highest amounts for petrol compared to our EU neighbours; only drivers in Denmark, Finland, and Greece paid more.

Looking across Europe, a number of governments have seemingly been more generous in their assistance with petrol and diesel prices. Germany reduced their petrol duty by 29.55 cents per litre, to the lowest allowed by the EU. In addition to this, diesel duty was cut by 14 cents per litre. Despite this, the policy has still faced questions in Germany. As would be expected, some questioned whether the state should subsidise fuel, given the negative externalities arising from its use. More importantly, strong concerns were raised as to whether the cut had actually been passed on to consumers, as fuel prices rose rapidly shortly after the tax cut. Marcel Fratzcher, Head of the German Institute for Economic Research stated that the reason why the cut had not effectively reached consumers was due to the lack of competition within the market. Since then, German Vice Chancellor Robert Habeck announced plans to tighten antitrust laws to ensure that oil companies pass on tax cuts to consumers. A key crucial difference between the tax cuts in the UK and Germany however, is the timescale. UK motorist will receive their 5p per litre cut until March 2023. Whilst the German scheme is more generous in magnitude, it has already ended, having only been scheduled to last from 1st June to the end of August. They’ve already started to see evidence of rising fuel prices, leading some German politicians to call for an extension of the tax cut.

Elsewhere in Europe, governments have taken a similar approach to Germany. Italy has cut fuel duty by 30 cents per litre until October, along with a swathe of measures that include assistance for energy bills and a tax cut for workers earning under €30,000 p/a. These measures were funded by €14.3bn worth of higher than expected government revenue. Countries such as Portugal, Spain, the Netherlands and Ireland have all reduced fuel duty in recent months, with the RAC stating that out of the countries to reduce fuel duty in Europe, Lichtenstein is the only one to cut tax less generously than the UK.

Questions can be asked as to the correct method of assisting with the high fuel costs that the whole of Europe is facing. What is clear though, is that even with this assistance, UK fuel prices remain extremely high. Countries such as Germany and Italy show that by a sharp temporary reduction in fuel duty, prices can be kept from spiralling out of control. The percentage that taxes contributed to the pump price in Germany fell from almost 54% to 35%, whilst the pump price only increased by around 13p per litre between January and July. For Italy, the tax contribution fell from almost 60% to 42% and was accompanied by a pump price increase of 22p per litre. The UK’s pump price increase was double that of Italy’s, whilst the share of taxes in the pump price only fell by 12%.

There does seem to be some appetite for further fuel duty reductions in the UK. A petition to reduce fuel duty by 40% for 2 years achieve over 100,000 signatures and was debated in parliament earlier in the year, and hundreds of vehicles protested high fuel prices by creating rolling roadblocks in July. As the UK prepares to welcome in a new Prime Minister, there certainly seems scope for further action on fuel duty. If it does occur, policymakers will need to ensure tax cuts are passed onto consumers rather than being swallowed by corporate profit.