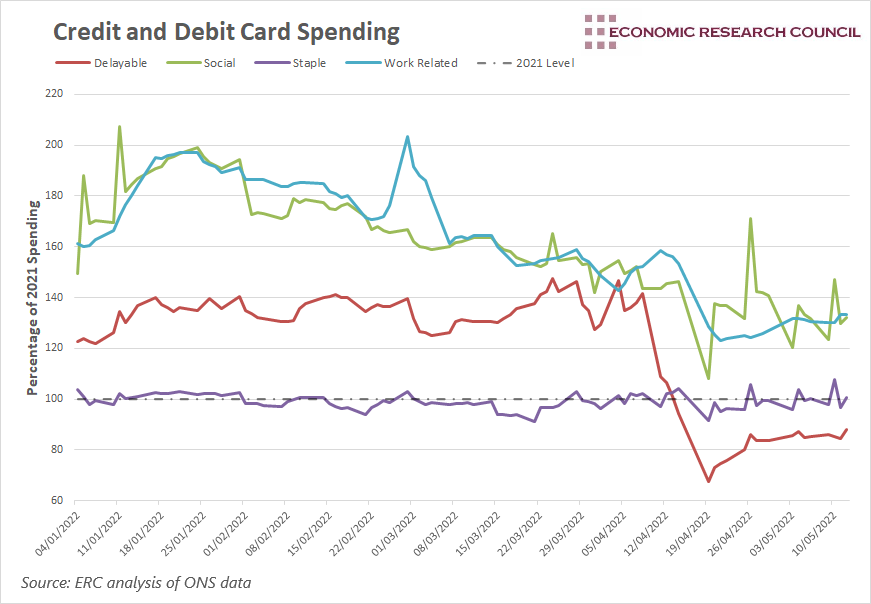 This week’s chart uses payment data to assess how people have reacted to the cost-of-living crisis this year. Whilst a squeeze is evident, people seem to be more willing to spend their money on activities that enable human interaction.

The chart shows experimental faster indicators of UK spending on credit and debit cards. The data displayed is the number of transactions on a given day, as a percentage of the same day last year. It tracks daily CHAPS payments made to around 100 large UK organisations. Payments are categorised into delayable (red), social (green), staple (purple) and work-related (blue). Work-related expenses largely refer to commuting payments.

With inflation running at its highest level in 40 years, this week’s chart assesses the spending decisions of UK citizens since the start of the year. Seasonal fluctuations in spending decisions mean that simply charting spending in each category over time does not provide many useful inferences. Instead, this year’s spending as a proportion of spending on the same day last year is used. One word of caution, however, is that as the chart assesses CHAPS payments from a specific list of retailers, the data fails to capture many electronic payments, as well as all cash payments. This second point means that the chart may fail to accurately reflect the spending of the poorest in society, who tend to rely more on cash.

Interestingly, taking an average of the last week of available data, spending in each category apart from delayable spending is not just above 2021 levels, but also above pre-pandemic levels. As such, the effects of the squeeze on costs of living have varied based on the spending category. It seems quite clear that social and work-related spending is being prioritised over delayable spending, which is understandable after an extended period of isolation.