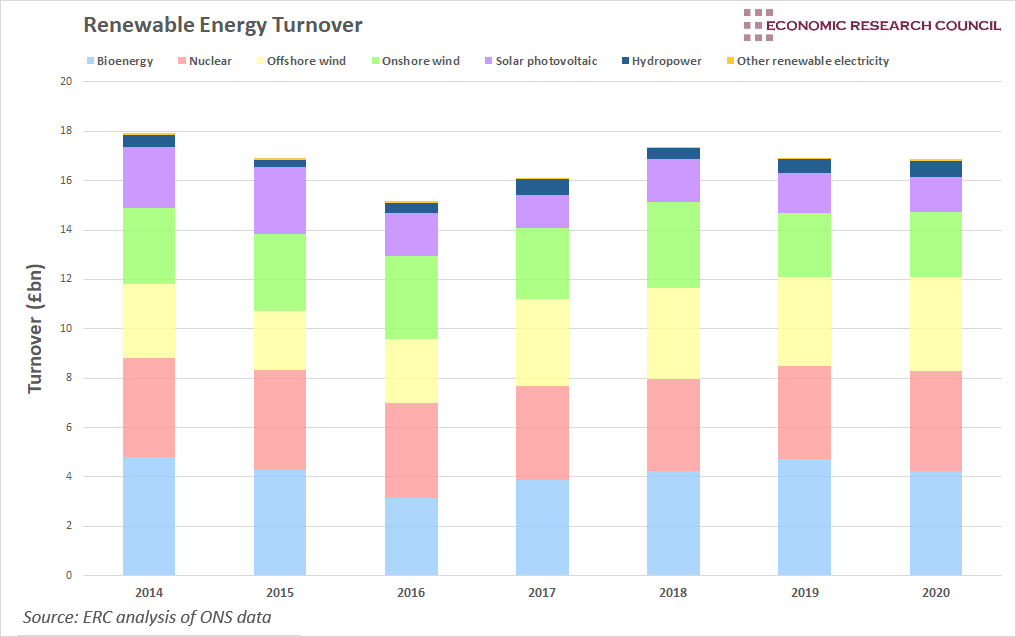 The renewable sector has developed relatively slowly. When assessing turnover of companies in the sector, many have decreased, with offshore wind bucking this trend. Falling turnover in industries generating renewable energy presents challenges for the government’s net-zero targets. Can greater reliance on offshore wind be a solution?

The chart presents the turnover of firms producing each source of renewable energy between 2014 and 2020. The data is in billions of pounds and has not been adjusted for inflation.

The chart displays a relatively stagnant renewable energy industry, with turnover largely hovering between £16bn and £18bn since 2014. Despite this, the picture is not equal across the board.

Although hydropower presents such a small proportion of renewable energy turnover, it nonetheless deserves an honourable mention. Turnover in the sector has increased by over a third since 2014. Whilst this only accounts for around £672m, it reflects its increasing provision of peaking, balancing, and other grid services.

Outcomes are far more disappointing for other means of generating renewable energy. Turnover of firms in bioenergy, onshore wind, solar power, and other renewable electricity fell by 12%, 14%, 43%, and 44% respectively between 2014 and 2020. Worryingly, employment in each of these industries has also fallen significantly through this period, with an average fall of 37%.

The UK government recently pledged to achieve a net-zero carbon electricity target by 2035. Realising this at a time where industries integral to its fulfilment are in decline seems like a losing battle. Nonetheless, in 2021, the government released the ‘Build Back Better’ Net Zero strategy. Interestingly, in terms of decarbonised power, it is heavily geared towards our offshore wind industry, with a key commitment to producing 40GW of power from offshore wind by 2030, enough to power every home. Sustaining and utilising our comparative advantage in offshore wind is surely wise, however, the proposals are fairly light on efforts within other renewable industries. Time will tell as to whether putting all of our eggs into offshore wind’s basket is a wise course of action.