With our first entry of the year, Chart of the Week assesses the optimism of different sections of the UK on the economy over the year ahead.

With our first entry of the year, Chart of the Week assesses the optimism of different sections of the UK on the economy over the year ahead. The charts suggest that rightly or wrongly, peoples lived experiences, and immediate circumstances have an impact on their perceptions about the wider economy. 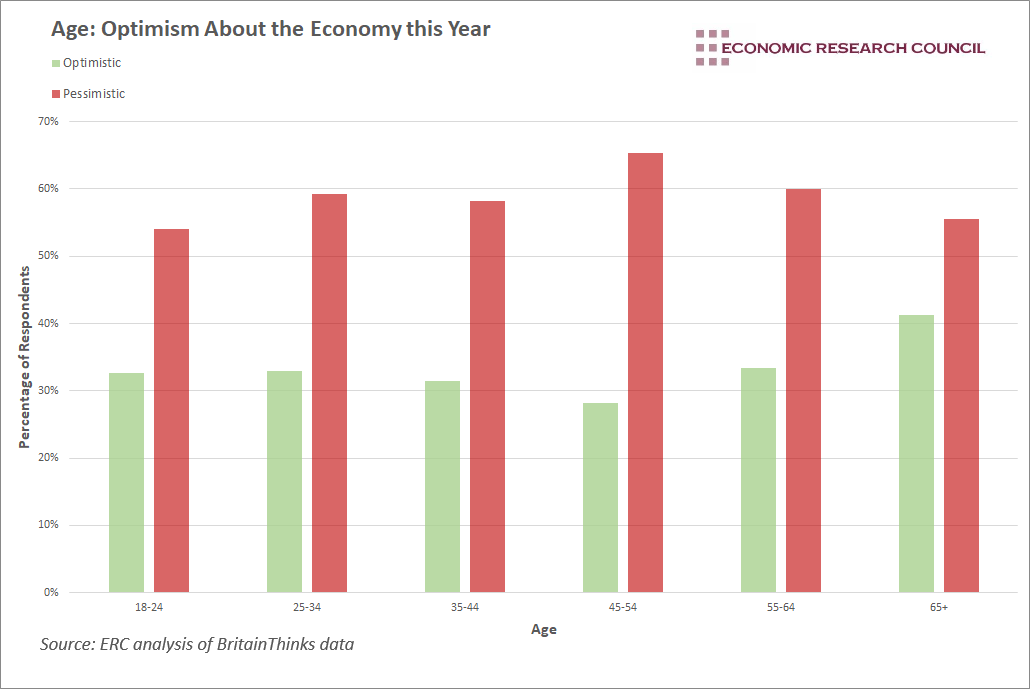 Similar levels of pessimism are seen in all age groups, other than 18-24 (who exhibit relatively low levels of pessimism) and 45-54 (where pessimism levels are the highest). This is particularly strange as younger people have higher incidences of unemployment and have lower salaries than older people. Their lack of pessimism may simply be a result of them having gone through less time for any worries to accumulate. In addition to this, optimism on the economy falls steadily up until 55-64, at which point it increases significantly. The increase coincides with the age at which people are able to take their pensions. Furthermore, older people are more likely to be homeowners, and more likely to have paid off their mortgage. These factors point to financial security as a strong reason as to why older people feel more optimistic than younger people about the economy this year.

The chart above shows that women are more pessimistic about the economy over the year ahead than men. In fact, this insight is nothing new, as women consistently tend to display higher pessimism levels about the economy than men. Women have lower average salaries and unfortunately are adversely affected by the gender pay gap. In addition to this, their employment also tends to be less secure. These factors increase women’s pessimism levels when discussing the economy. 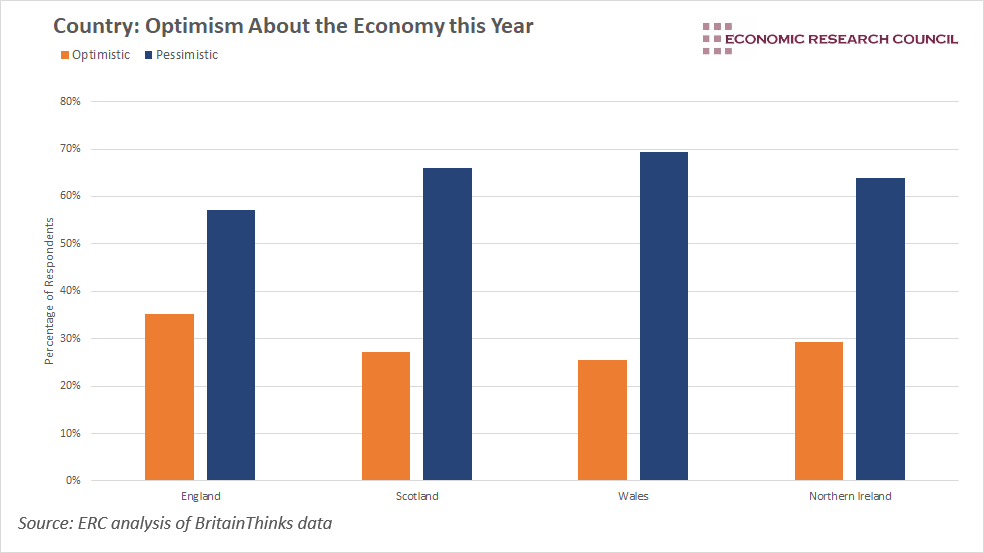 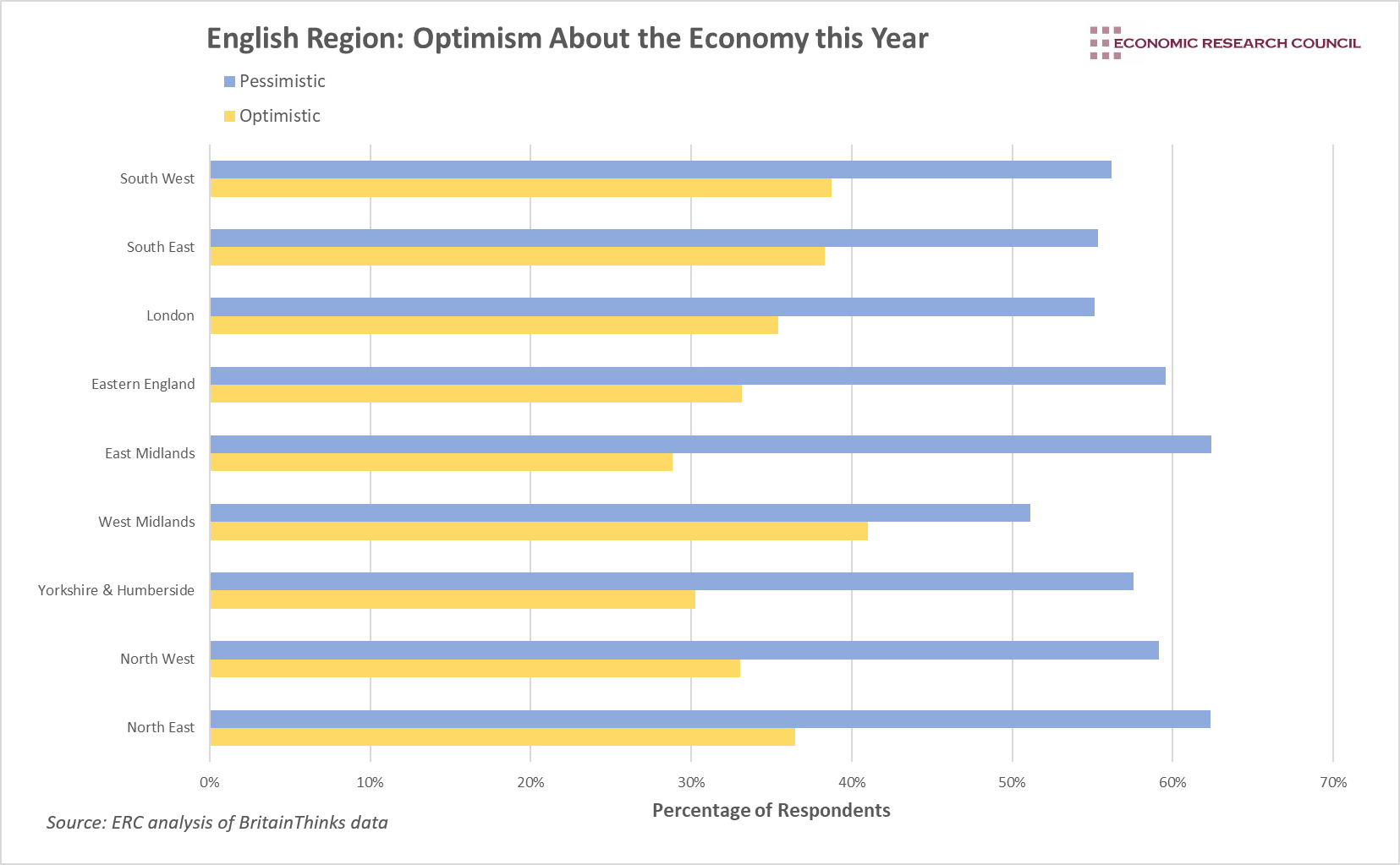 The two charts above display very similar phenomena. People in England exhibit the lowest levels of pessimism and highest levels of optimism about the economy compared to Scotland, Wales, and Northern Ireland. When assessing optimism within England, people in northern areas are generally more pessimistic about the economy than people in the south of England. The picture through the UK as well as within England is somewhat reflective of political allegiances. Analysis by BritainThinks has shown that 55% of Conservative voters are optimistic about the economy over the year ahead, with the figure falling to 21% for Labour voters, and 17% for SNP voters in 2019. Areas that are more optimistic about the economy over the year ahead tend to have a higher prevalence of people who voted for the Conservative Party in 2019. 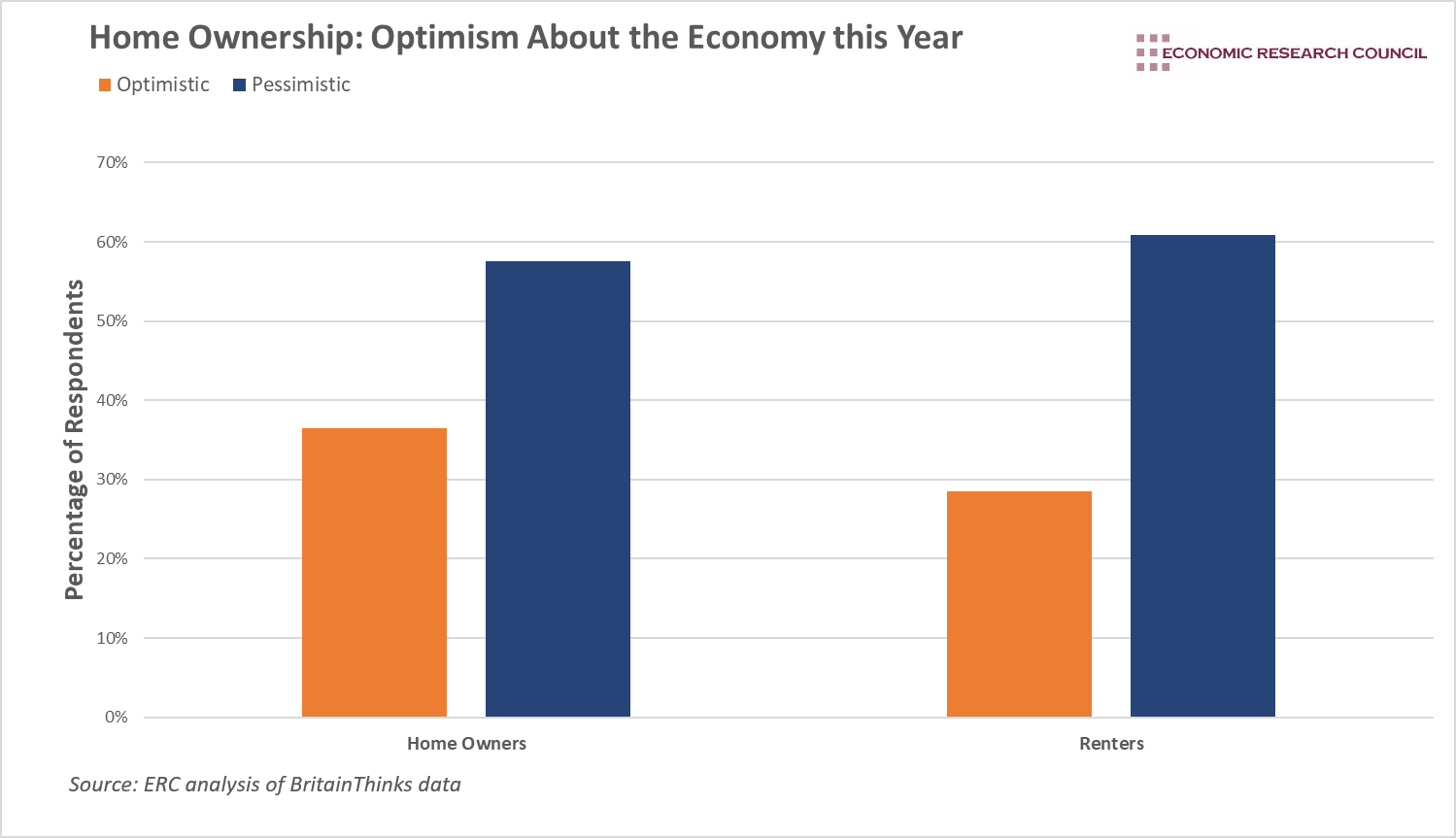 Homeowners are much more likely to be optimistic about the economy over the year ahead compared to renters. As was the case with older people, homeownership provides a level of economic security, enabling people to weather any potential storms ahead. In addition to this, 2021 has placed homeowners in an excellent position. The value of the average home in the UK grew by 10.4% in 2021, which is likely to have created a wealth effect, improving homeowners perceptions of the wider economy. 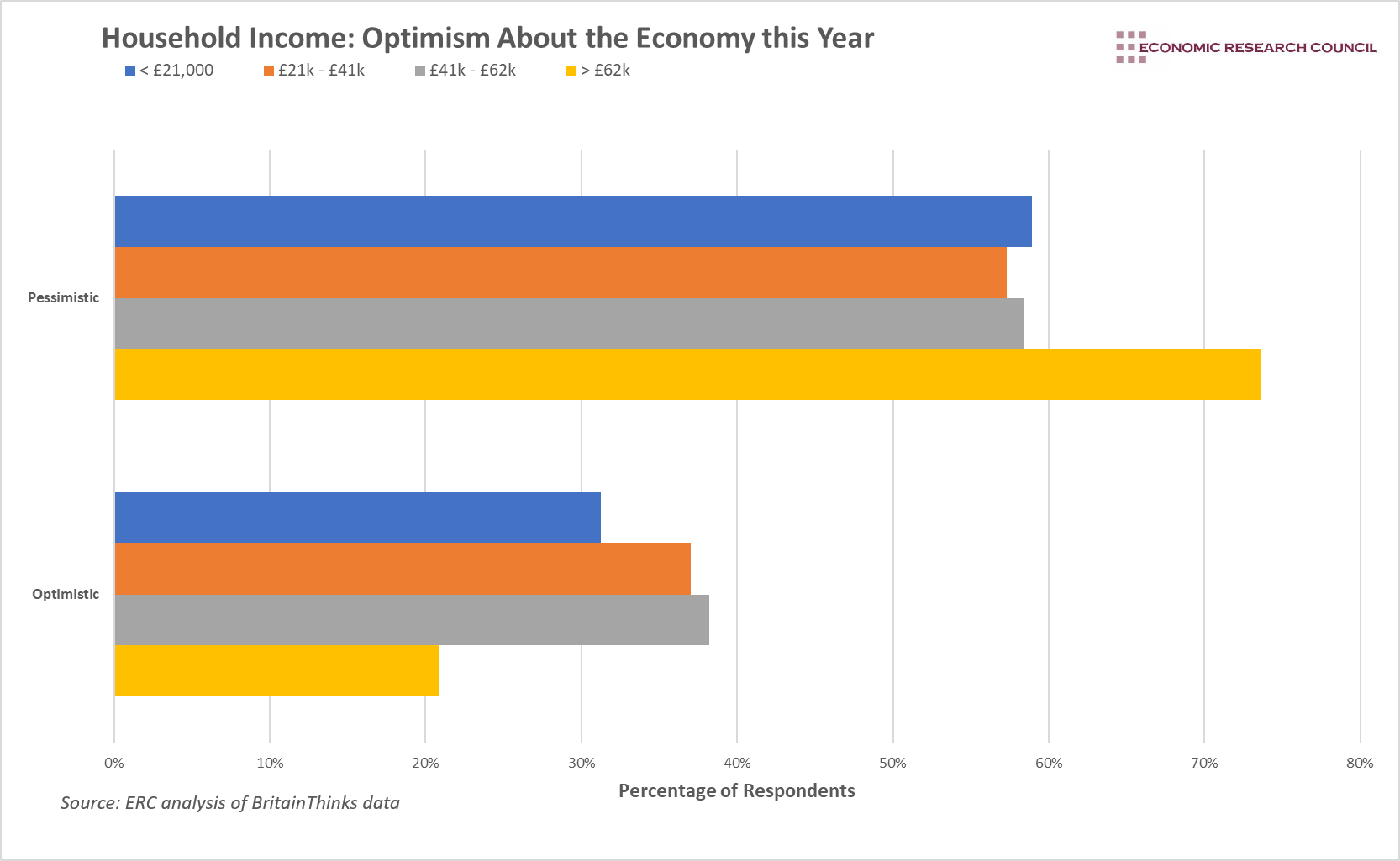 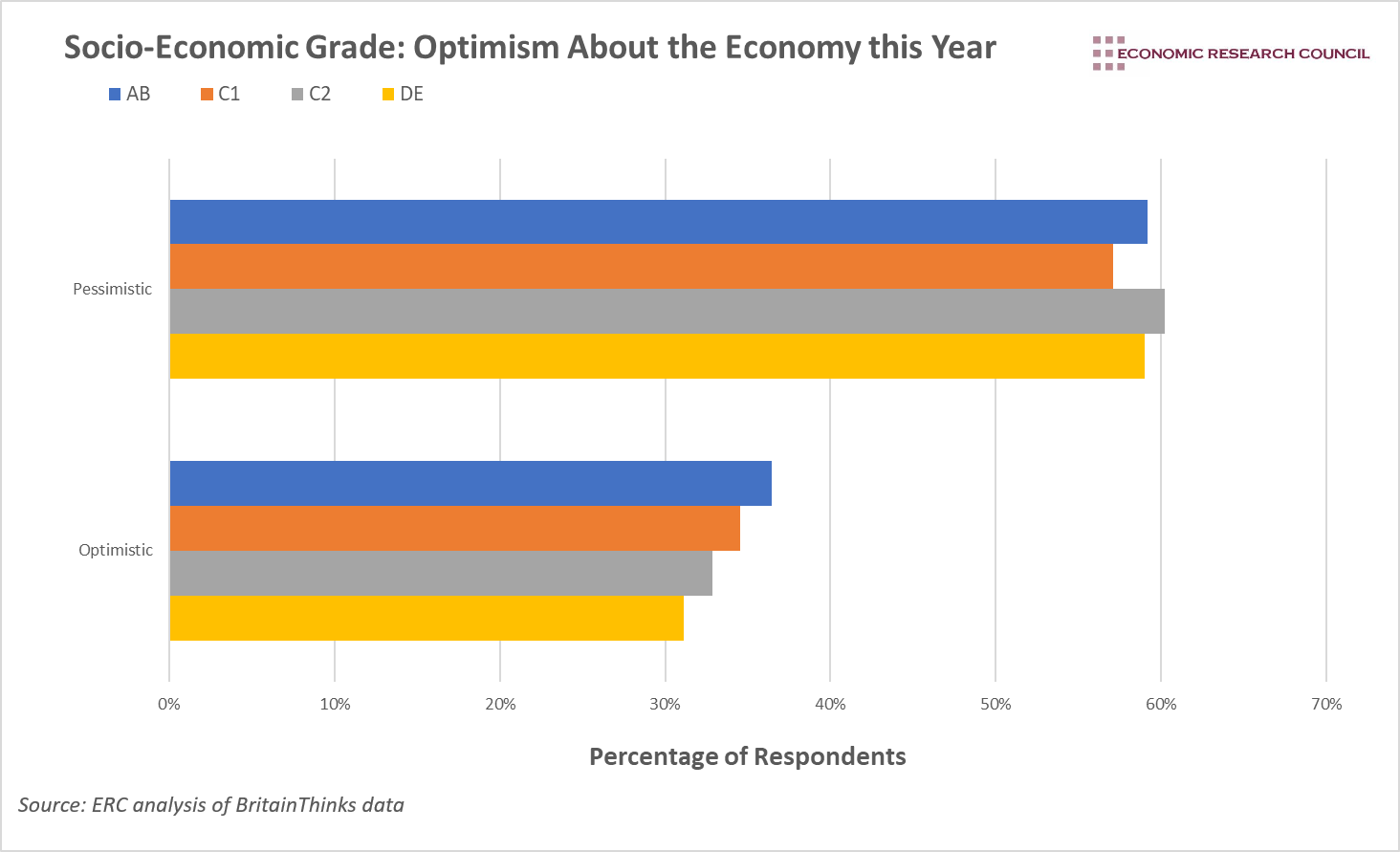 Levels of pessimism were similar in all income groups apart from those earning more than £62,000. Interestingly, when comparing this to socio-economic groups, the result is different. Here, we see very similar levels of pessimism for all groups and higher optimism for higher socio-economic groups. Of course, while there is some correlation between income and socio-economic groups, they are not direct substitutes for each other. The increase in pessimism for higher earners, without an increase in pessimism for those in the AB social class, does suggest a very income specific cause for the higher level of pessimism in households earning over £62,000. One potential answer is the consideration of tax. The March and October budgets both came with tax rises. Coupled with the significant sums spent to prop up the economy over the last two years, further increases in taxation may arise in 2022. Higher earners may see this as particularly challenging. This analysis would suggest that tax rises are expected to be progressive. 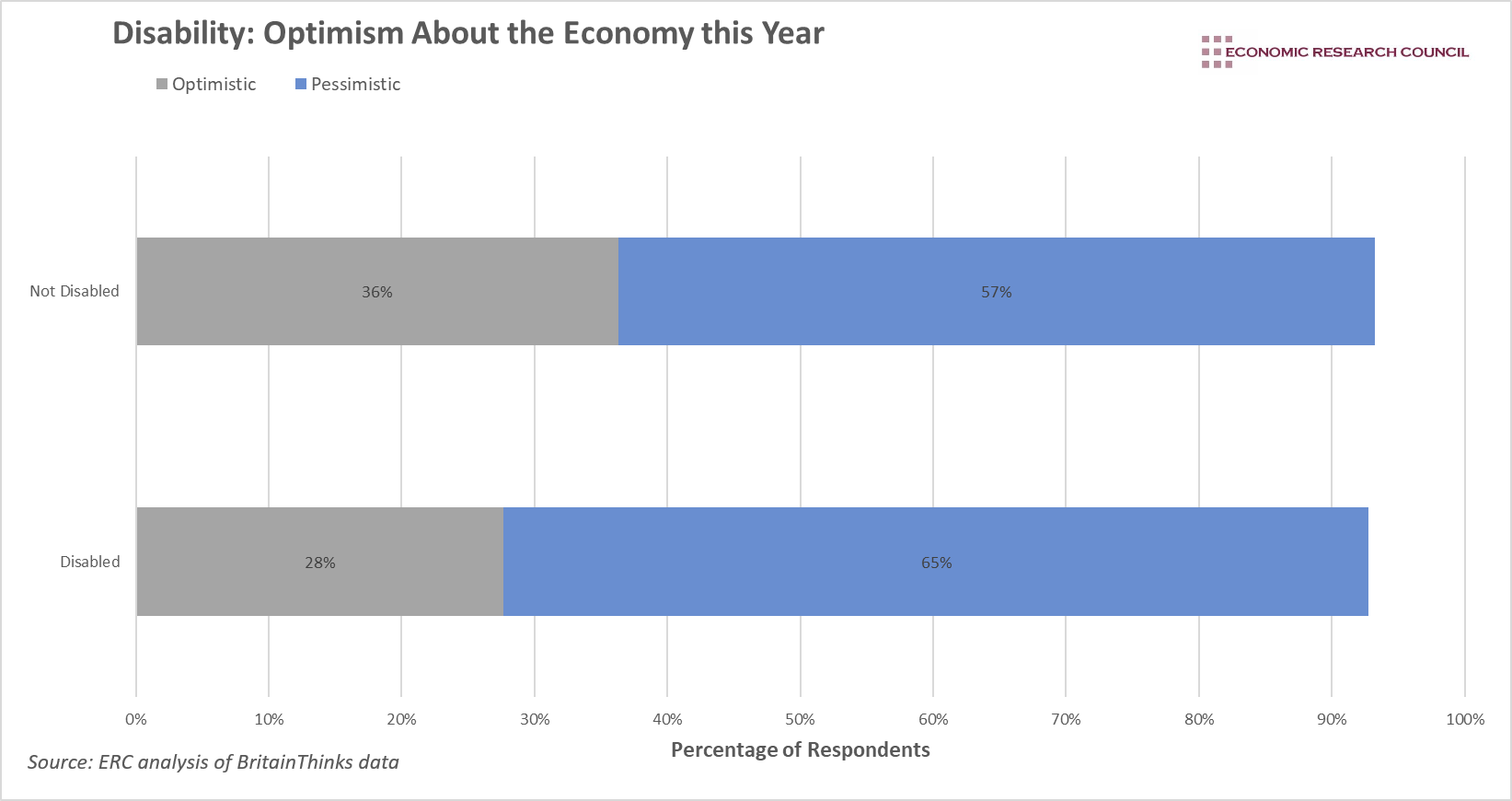