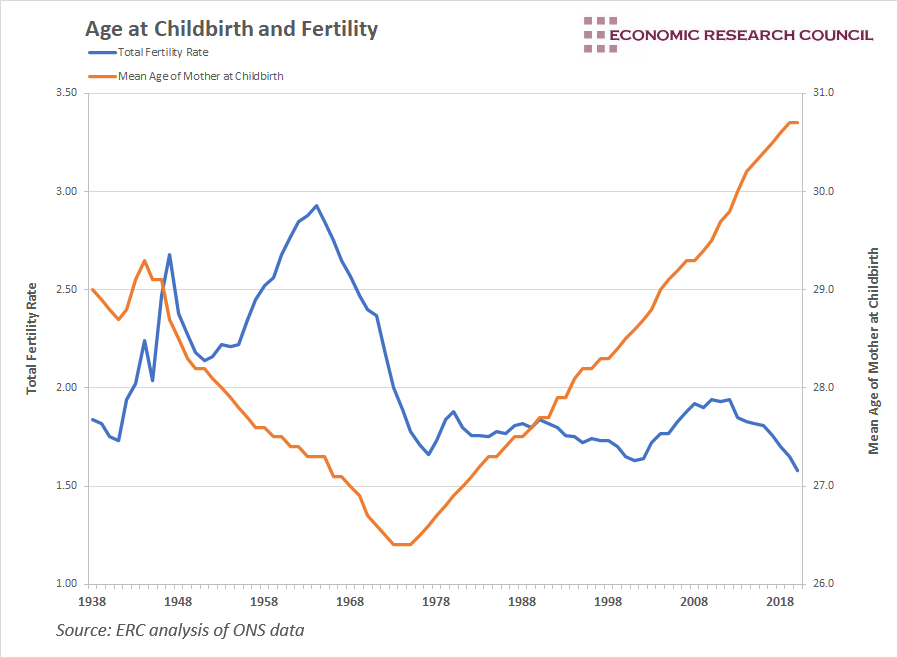 Fertility rates are at historic lows whilst the average age of childbirth has been on the rise since the 1970s. This week’s chart assesses the likely effect of this on individuals and society.

The blue line denotes the total fertility rate. This is the average number of children women would bear if they experienced the age-specific fertility rate each year throughout their childbearing life. This is read from the left-hand axis. The orange line displays the mean age of women at the point of childbirth and is read from the axis to the right.

The chart shows total fertility rates at a record low in 2020, with women on average bearing 1.58 children. This continues the declining trend of fertility rates, falling for 5 years in a row in England and Wales. Interestingly, the total fertility rate has been below the replacement rate since the end of the baby boom in the early 1970s.

Several factors have been put forward for the decline in fertility rates. Firstly, access to contraception has become more widespread over time. Secondly, infant mortality rates have significantly reduced in England and Wales, falling from around 18 infant deaths per 1,000 live births in 1970, to under 4 per live birth in 2019. In addition to this, the orange line suggests postponing childbirth has also potentially led to lower levels of fertility.

This trend is set to continue. The Centre for Population Change has predicted a “decline over the next three years leading to significantly fewer births annually.

The orange line displays the incredibly sustained trend of rising average childbirth age, at 30.7 in 2019, up from 26.4 in 1975. A major factor in this is the growing financial considerations surrounding childbirth. The Child Poverty Action group has suggested a cost of £71,500 to raise a child to the age of 18. In addition to this, the average cost of nursery for 25 hours per week stands at £6,800 annually. This is all in the context of childcare costs rising 4 times faster than earnings in the UK, and 7 times faster in London between 2008 and 2016. Coupling this with rapidly rising house prices makes it easy to understand why people are waiting longer to have children.

These ideas have been shown to create further effects. As discussed above, a higher mean age of childbirth is likely to impact fertility rates, and potentially impact future population growth. Despite this, other effects occur at an individual level. Women who give birth later tend to have higher lifetime earnings than those who give birth earlier. They also tend to have accrued more experience and can rely more on in-work entitlements than women who have given birth earlier.

Low fertility levels may not be at the forefront of policymakers’ minds for now, but it does have the potential to pose serious economic issues. Falling fertility rates coupled with an ageing population will eventually put considerable strain on public finances, reducing tax receipts whilst increasing spending on social security. These issues have already started to impact countries like Japan, where over a third of the population will be over 65 years old in 2030.