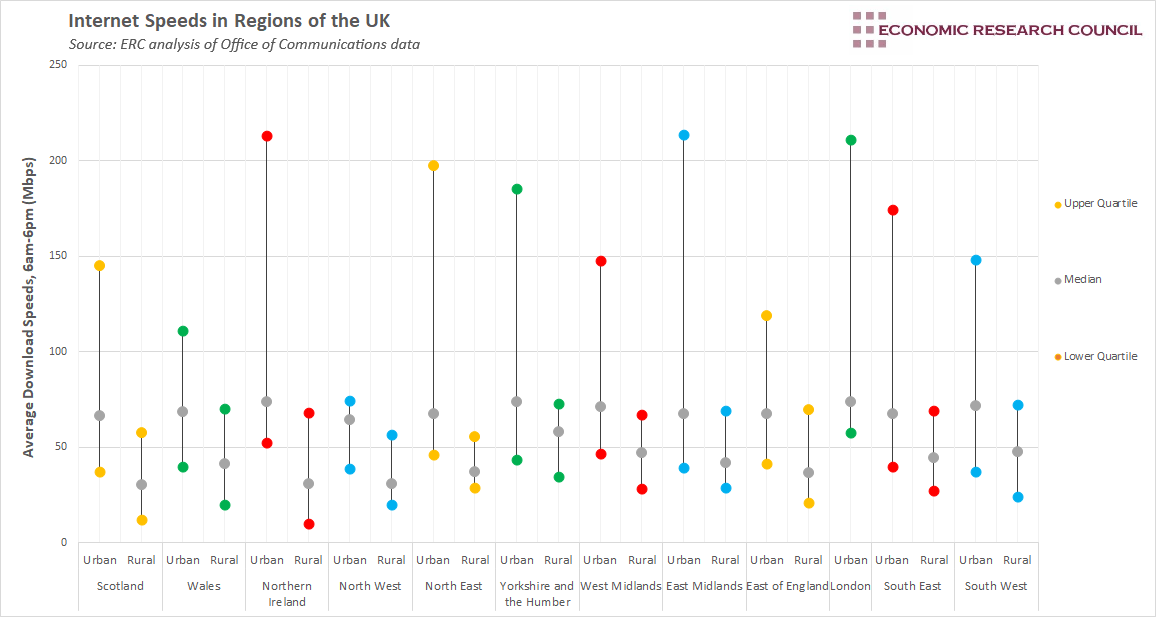 Project Gigabit is scheduled to roll out fast broadband connections to remote locations in the UK. The chart shows that certain areas are in desperate need of it. Whilst most urban areas are showing signs of increased uptake of fast broadband, rural areas in the UK are lagging far behind. The cost to providers of establishing networks in these areas is often cited as a reason for this. As such, Project Gigabit should go some way to improving connectivity across the UK.

The chart displays median broadband speeds in each region of England, as well as speeds in Scotland, Wales, and Northern Ireland. Each region is split into urban and rural areas to highlight speed differences. In addition to median values, the upper and lower quartiles in each region are also displayed. Regions are colour coded to aid comparison between urban and rural areas. Only urban data is present for London.

The data shows great differences in broadband speeds between regions, as well as between urban and rural areas. In each region median broadband speeds exceed rural speeds, as would be expected due to better infrastructure and shorter connections in urban areas. In fact, median speeds exceed 50Mbps in urban areas of each region of the UK, whilst Yorkshire and the Humber is the only region to exceed this figure in its rural areas. Around a fifth of the population of England and Scotland live in rural areas, with this figure rising to around 35% for Wales and Northern Ireland. As such, ensuring fast broadband connections are accessible for those outside of urban areas has the potential to impact millions of people.

The uneven picture presents problems for the UK, particularly in attracting investment to specific regions, especially within urban areas. As such, the North West’s provision of high-speed broadband in urban areas is particularly striking and could be a limiting factor in the services sector activity within the region. Here, 75% of the population experience internet speeds below 75Mbps, indicating comparatively low uptake of fast broadband.

The chart above portrays the extent that ‘levelling up’ is needed through the UK. Research from the Chalmers University of Technology has shown that doubling internet speeds can boost GDP by 0.3%. Furthermore, effects are likely to be greater in areas with lower incomes. Faster broadband networks increase the attractiveness of locations to companies and provide a more favourable environment for entrepreneurial activity. This not only improves local GDP but can also reduce levels of unemployment.

As we transition to a future in which remote work becomes a reality for many people, the issue of internet speed becomes ever more important. Aside from the ability to work from home, ensuring fast speeds across the UK can help to ensure the nation can work productively outside of the office. With the proportion of homeworking job adverts rising from 2.7% in May 2019 to 7.4% in May 2021, a concerted effort must be made to ensure the infrastructure is in place to facilitate this shift.

Plans are currently afoot to ensure more than one million hard to reach homes are connected to 1Gbps broadband in the government’s Project Gigabit. Targeting rural areas should serve to bring them up to speed with urban areas of the UK. Phase 1a of the project includes rollout to parts of Cumbria, due to start at the beginning of 2022, which should improve the issues in the North West discussed above.

The picture isn’t particularly good in comparison to our neighbours across the Channel. According to Cable.co.uk’s annual league table, the UK’s broadband speeds are among the slowest in western Europe, with the average western European speed being twice as fast as ours. Globally, the UK ranks 43rd, far behind countries like Liechtenstein and Iceland that have invested heavily in pure fibre broadband. Whilst the small size of these countries has played a significant part in their success, it is pleasing that we are following their lead and investing in much needed infrastructure.