In light of the budget and spending review, we use a series of charts to take a deep dive into the key announcements, the Office for Budget Responsibility (OBR) forecasts, and what this means for UK plc in the upcoming years. 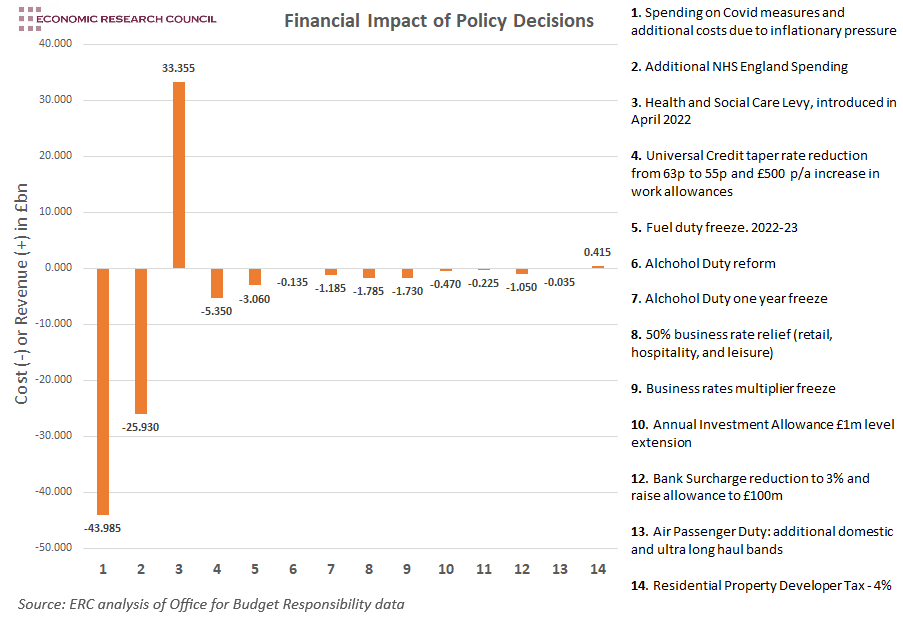 The chart above shows the impact on spending and revenue of 13 key policies announced in the Chancellor’s budget, as well as the continuation of measures aimed at dealing with covid, and additional spending due to inflationary pressure. The impact shown in the chart is up until the end of the current Parliament. As the first bar shows, spending around covid will still be prevalent through the rest of the current Parliament. The Health and Social Care levy is the main additional revenue stream for the government, but as it will be spent directly on the NHS, it will not help to ease pressure in other areas of spending. The Chancellor’s speech seemed skewed towards spending rather than generating revenue. This is evident in the analysis above, with several more spending commitments, duty freezes, and allowance uplifts than increases in taxation. One such policy, the 10th freeze in fuel duty, is set to slightly ease pressures on the cost of living but does come at a cost of over £3bn before the end of the Parliament. Combined, the Alcohol Duty reform and one year freeze should save the alcohol industry £1.3bn, which helps to explain why The Wine and Spirit Trade Association has heralded it as a “huge relief”. 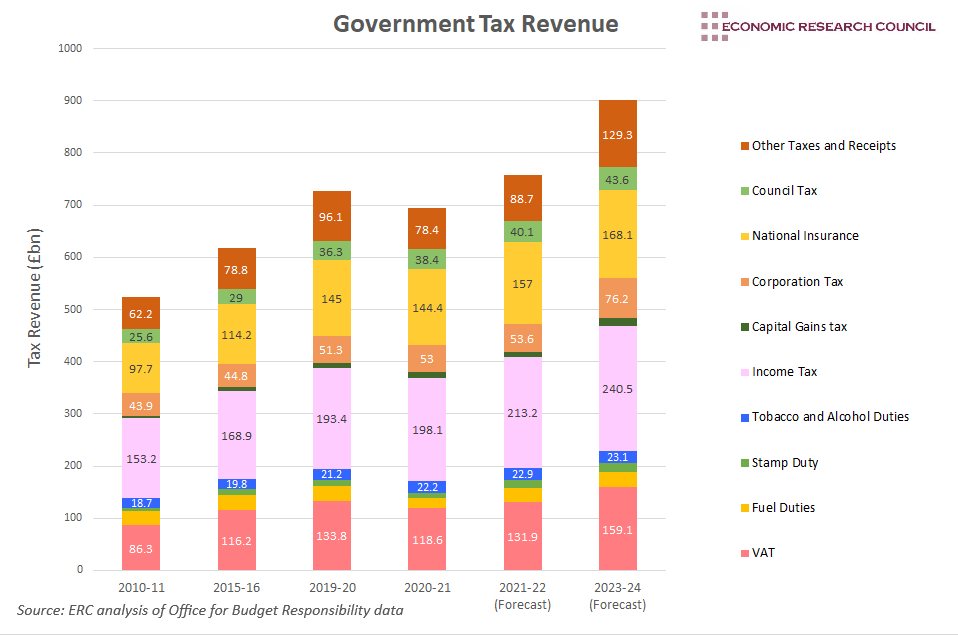 The analysis in the paragraph above may seem unusual when assessed against this tax revenue chart. Three factors help to explain the increase in tax revenue that is expected over time. Firstly, the Health and Social Care levy contributes significantly to national insurance contributions. In addition to this, it is estimated that improving economic growth and inflation will raise overall tax revenue by around £50bn per year, largely seen in improvements to income tax, corporation tax, and VAT receipts. Lastly, despite this budget being light on tax increases, the March budget was the reverse. In March, the Chancellor announced that corporation tax will rise to 25% in 2023 and the personal allowance will be frozen between 2022 and 2026. The combined effect of these three points can be seen in the chart above. 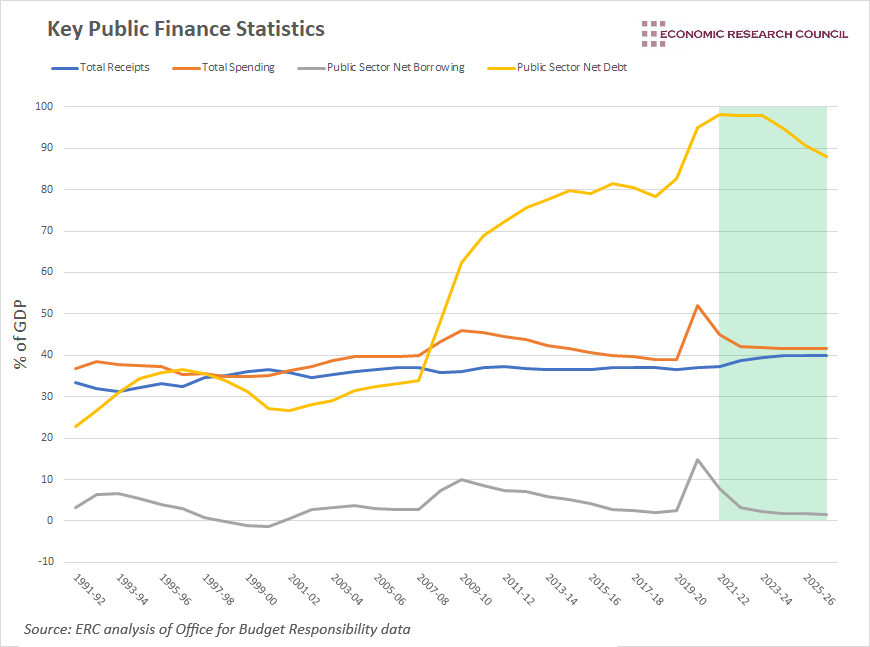 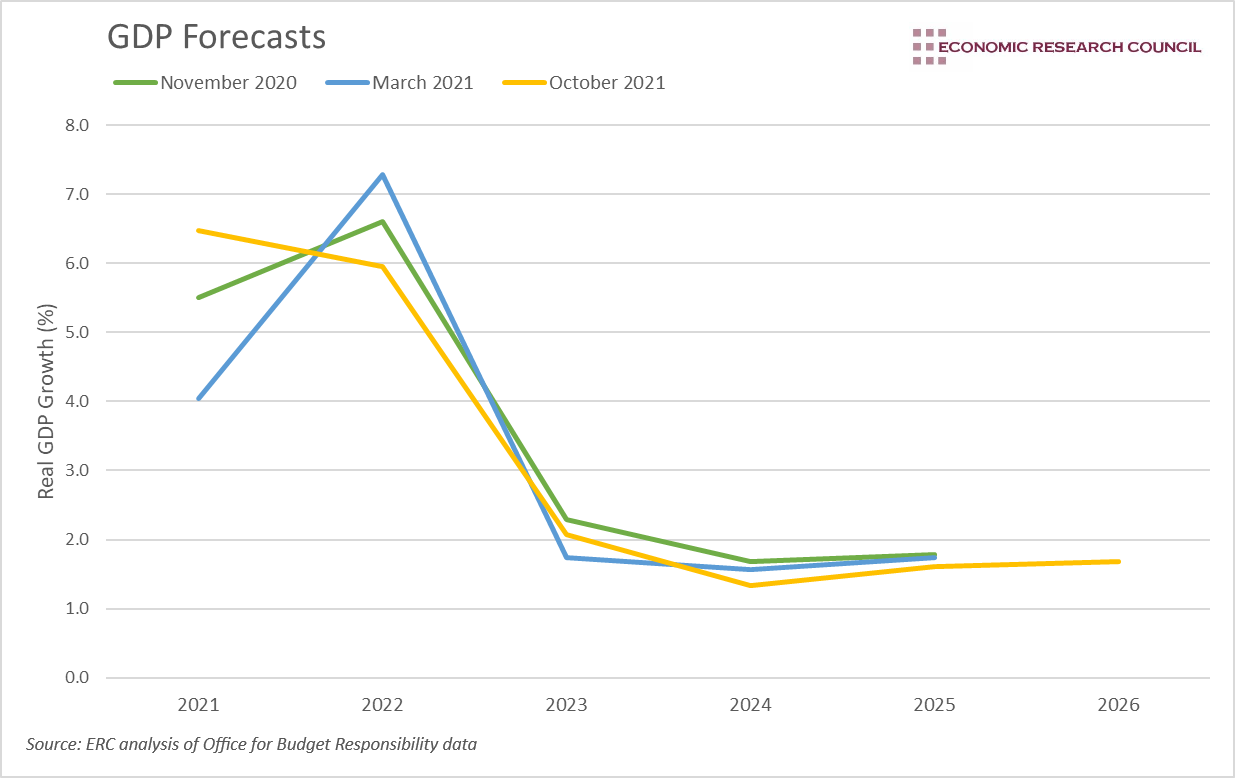 Each GDP forecast paints a similar picture, with a strong short term rebound in growth, before returning to a steady rate of around 1.5%. However, whilst March’s 2021 growth forecast was more pessimistic, the OBR now expects the UK economy to grow by almost 7% this year, as the March forecast overestimated the fall in output associated with the last lockdown. Despite this, the supply constraints that are currently being experienced are expected to slow the rate of growth relative to the OBR’s last forecast. 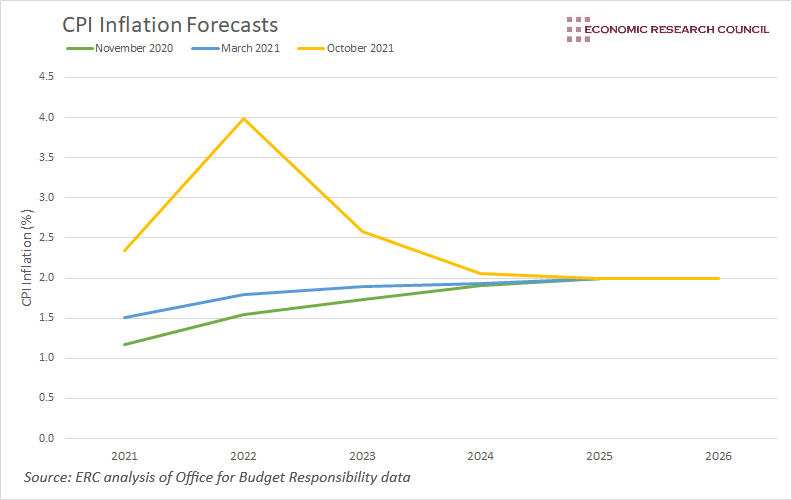 A strong rebound in demand combined with constraints to supply have altered the OBR’s forecasts for inflation over the coming years. It is expected to peak at 4% next year, before falling back to its target in the medium term. It is worth noting, however, that the OBR are also preparing for a scenario in which inflation peaks at 1% higher than the above forecast and falls back to the 2% target a year later than predicted. 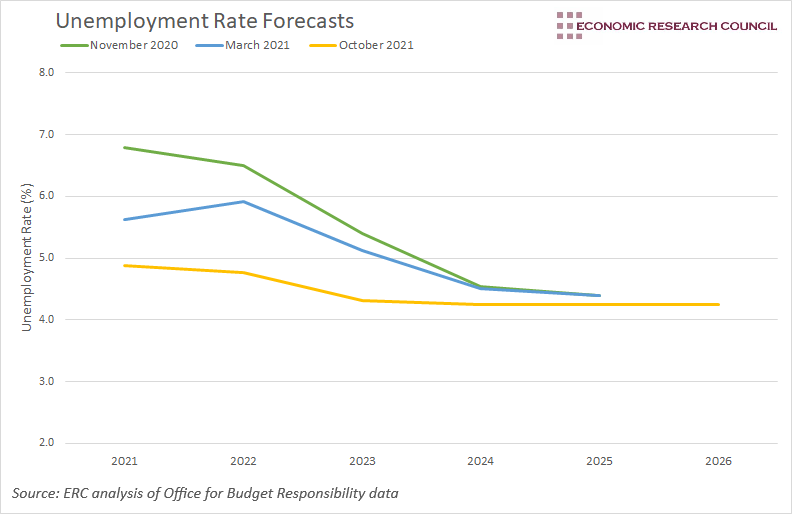 The OBR’s unemployment forecast has become more optimistic over time, owing in large part to the rapid reopening of the economy since March. A record 1.1m vacancies were advertised in the three months to September. As such, they expect unemployment to fall to 4.3% in 2023, a year earlier than previously forecast, and remain at that level in the medium term.