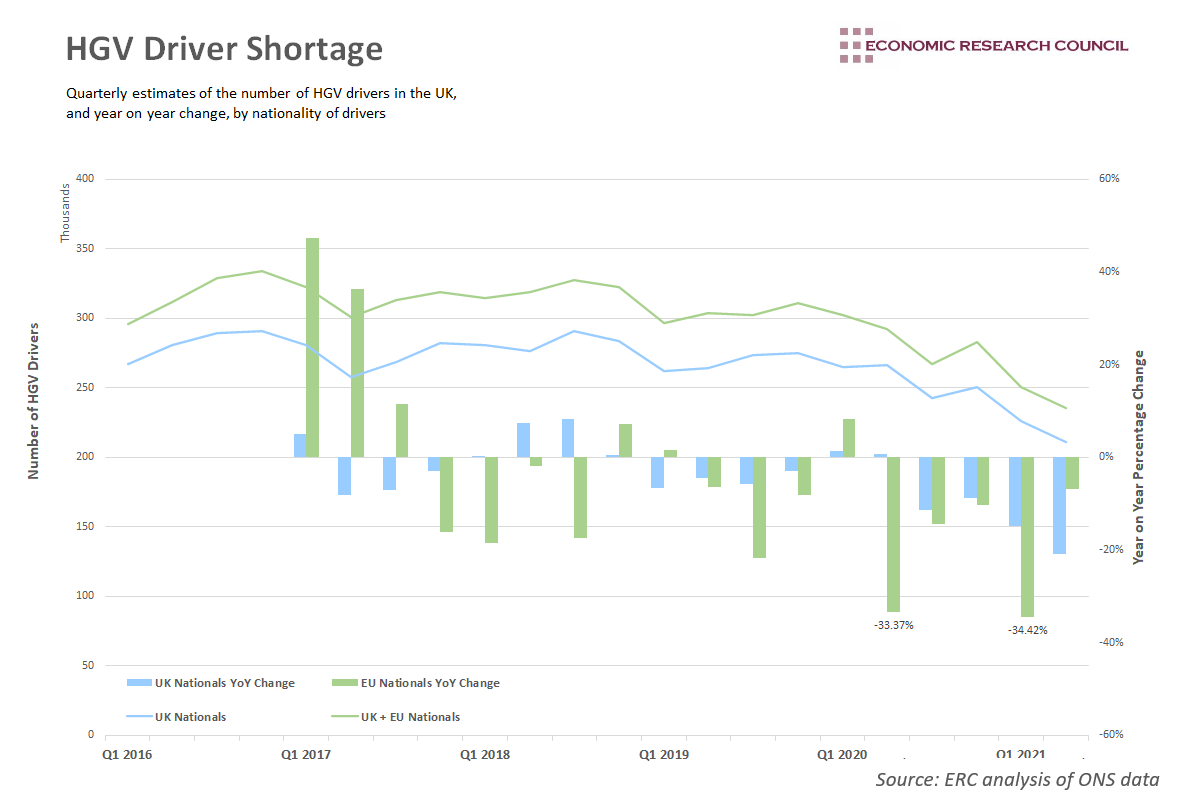 Supply chain issues in the UK have largely used Brexit and Covid-19 as scapegoats. The analysis presented below suggests that while these events have had an impact, we would still be facing shortages of HGV drivers if we had not left the EU and faced a global pandemic. As such, to mitigate against future disruptions, we need to address inherent issues around the supply of HGV drivers.

The chart displays the number of HGV drivers operating in the UK since 2016. The blue line represents drivers from the UK while the green line adds EU nationals onto this figure. The bars show the percentage change in drivers compared to the previous year. Blue bars represent UK nationals while green bars represent EU nationals.

Pictures of lengthy queues emerged across television screens in recent weeks, as motorists struggle to fill their tanks. Reports have highlighted problems in other industries, with chicken taken off menus at KFC and Nando’s, Ikea running out of mattresses, and Irn-Bru struggling to make deliveries. We are in the midst of widespread supply chain disruptions. In this week’s chart, we attempt to delve into this crisis to shed light on its causes and assess potential solutions.

Multiple explanations have been put forward as to the cause of the problem. Much has already been discussed about the fact that the issue is one of transportation rather than production. The UK currently faces a 100,000 shortfall in HGV drivers according to the Road Haulage Association. Beyond this acknowledgement, there seems to be little agreement as to what has caused it. Current discussions seem to be based around one of two ideas: 1) The UK’s exit from the European Union has reduced the number of qualified HGV drivers, and 2) The pandemic has limited the number of prospective HGV drivers that could gain the necessary licence. We’ll assess these assertions against the evidence in the hope of gaining a clear picture as to the nature of the crisis.

Further analysis highlights interesting points. When assessing the percentage change compared to the year before, on the whole, the number of EU drivers has fallen at a faster rate than UK drivers since 2018. The key periods to assess here are Q2 2020 and Q1 2021, whose figures are labelled in the chart. Q2 2020 shows an extremely significant reduction in the number of EU HGV drivers compared to the year before, whilst the number of UK drivers increases, albeit marginally. These two factors strongly suggest border issues due to Covid have made it difficult or unfeasible for EU HGV drivers to work in the UK. Q1 2021 sees another sharp year on year reduction in the number of EU HGV drivers in the UK. This coincided with the end of the Brexit transition period, where the UK left the single market and customs union. As such, it does seem as though the UK’s withdrawal from the EU has played some part in the shortage of HGV drivers we are experiencing today. However, this is by no means the whole picture.

The reported shortage of HGV drivers stands at 100,000, but we have only lost 20,000 drivers from the EU since 2017. Covid and Brexit played a part in reducing the number of EU drivers, but we would still be in a dire situation had they remained in the UK. When assessing the effect on UK drivers, the 4 largest reductions in the number of drivers occurred in the 4 quarters after Q2 2020, showing the devastating effect that Covid 19 had on HGV labour supply, albeit with a slight lag. The most cited manifestation of this has been in the backlog of 40,000 drivers waiting to take their tests.

The impact of Brexit and Covid helps to understand the current shortage of HGV drivers, but still leaves questions unanswered. The total stock of HGV drivers has fallen by 60,000 since Q2 2020, which means a shortfall of 40,000 already existed. Problems within the industry have only been exacerbated by recent events. We need to understand how this can occur within an area so crucial to the smooth functioning of the UK economy. The replacement of older staff is a particular issue facing the industry. According to the Road Haulage Association, less than 1% of HGV drivers are under the age of 25. More drivers are retiring than joining each week, partly due to the high costs of training, and historically low relative wage growth within the industry.

As such, the 5,000 temporary visas for HGV drivers will only partially plug the deficit in EU drivers, and do nothing to abate the fundamental determinants of the shortage of labour currently experienced. More needs to be done to counter the historical issues within the industry that are currently being ignored due to the more headline-grabbing, short term issues around the pandemic and Brexit.