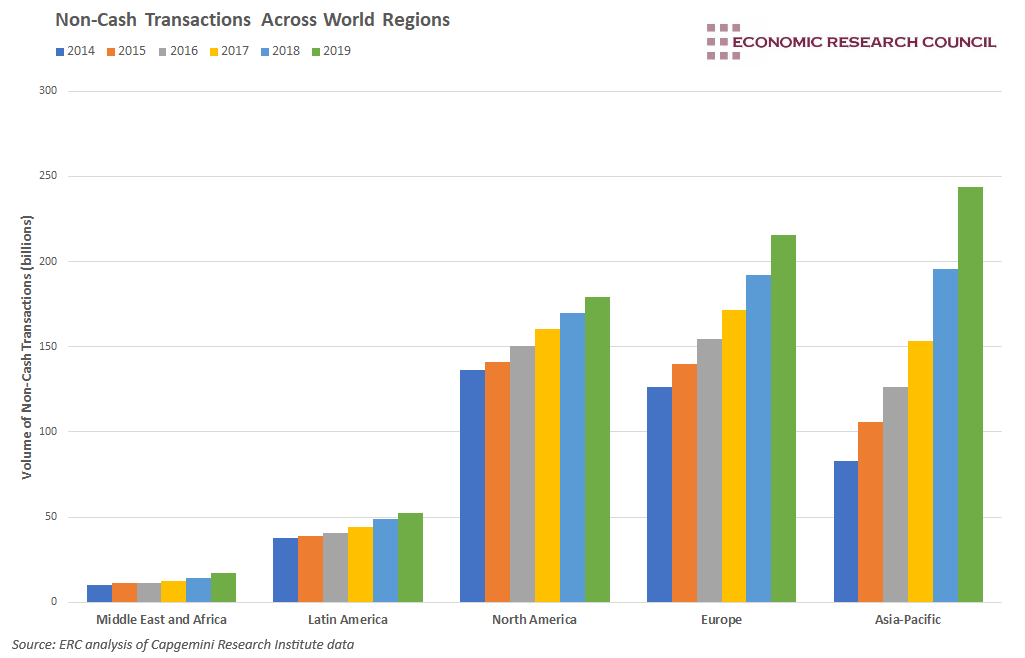 Ahead of our webinar ‘Unearthing the Import of the Payment System’ with Natasha de Terán, we look at the extent to which cash is being replaced by other forms of payment. The chart shows strong growth in non-cash transactions for all regions, but particularly the Asia-Pacific, which has been led by a shift towards mobile payments.

Extraordinarily, the lowest rate of growth achieved by the Asia-Pacific (19.7% in 2016) outstripped every other region in all years that were analysed. Assessing this intense growth can provide us with insights into the reasons for changes in payment systems, as well as insights into their future.

Comparing the growth in non-cash transactions in the Asia-Pacific against the USA or Europe is perhaps unfair, mainly due to their developed networks of non-cash payments in the form of debit and credit cards. However, growth in the Asia-Pacific remains strong compared to the rest of the world. A key reason for this is the choice of payment method within this region. Rather than credit or debit cards, mobile payments lead the way in the Asia-Pacific. 32.7% of point-of-sale transactions are made via mobile in China, compared to around 15% in Europe and the USA. This is expected to rise, as the number of mobile wallets in Southeast Asia is set to grow by 311% by 2025, according to analysis by Bloomberg.

Observing the Asia-Pacific’s experience will surely raise questions on the future of payments in the UK and USA. Will mobile payment become the norm in the western world, doing away with cash, and even plastic? A few things suggest this is unlikely. Firstly, the experience of the Asia-Pacific owes a lot to improvements in its telecom infrastructure. Countries such as China, Japan, Singapore, and South Korea are leaders in 5G deployment, which has assisted the adoption of mobile payments. Further to this, culture and norms can have a significant impact, making payment systems look, feel, and behave differently across countries. This is highlighted by the fact that according to the European Central Bank, 47% of non-cash transactions were completed by card in 2020 in the Euro area.

Despite regional differences in approach, the shift away from cash, as expressed in the chart, is clear. It is a shift that has been encouraged by many, heralding potential reductions in criminal activity, transaction costs as well as improved convenience. The other side of the argument points to the unbanked, elderly, and those without adequate access to technology being left behind, whilst a shift to a cashless society will have significant implications on freedom, privacy, and security. The battle between these factions will surely shape the design and modification of our payment system for years to come.