NextOnline Webinar: Driving the Silk Road with Douglas McWilliams
Chart of the Week

The Impact of COVID 19 on Shipping

Concerns exist around the possibility of new barriers and local regulations in global maritime trade, or that nations seek to extend their flag protected fleets, leading some to expect a particularly painful and stilted recovery. 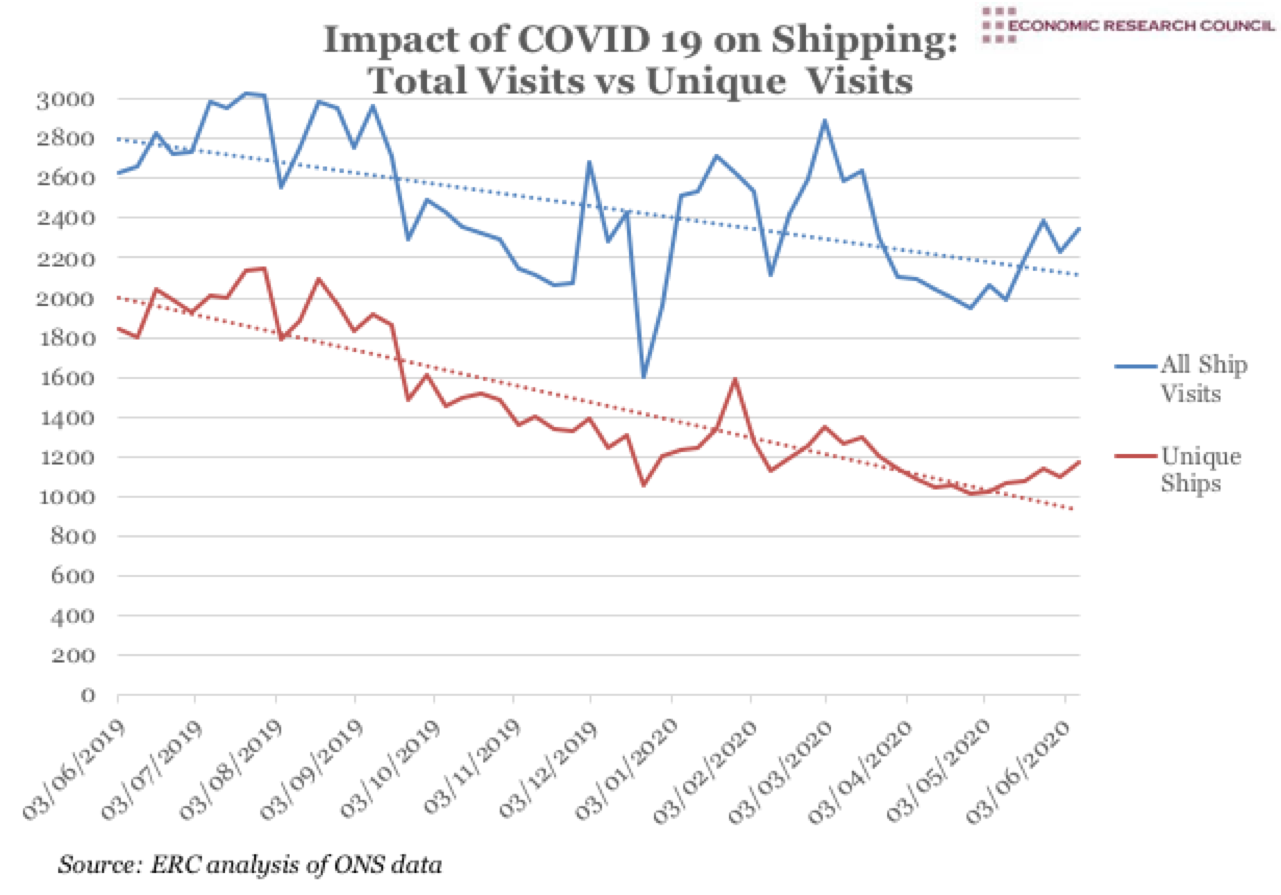 The Impact of COVID 19 on Shipping

In 2015, MaritimeUK reported that the UK shipping industry generates and supports £13.9 billion in business turnover, £4.3 billion in GVA terms alongside ensuring the employment of over 150,000 individuals. United Kingdom shipping operators had long known that the commercial conditions in 2020 were going to be tough. Since the escalation of tariffs in 2018, deteriorating relations between the US and China had eroded the scale of overall maritime cargo by 2%. Further concern is posed by post-Brexit regulatory and commercial uncertainty which is anticipated to have a big impact.

The chart shows the extent of the challenge faced by maritime trade, which has been exacerbated by the stagnation of merchant fleets in the United Kingdom. The pandemic period has caused an ‘idle ship’ crisis that might well pre-empt a similar trend worldwide in the long term, due to the prohibitive operational costs involved in idle ship reactivation. As can be seen on the graph, there is a steady fall in all visits of commercial fleet to the ports of the United Kingdom, from just over 2,800 ships at the beginning of March to 2,000 in June. As might be expected, there was a similar, if more severe, fall in unique visits (a reduction of 400 during the same period). The ports that underwent the lion’s share of the reduction were the busiest ones, namely Grimsby & Immingham and London. The latter received almost 100 ships a week fewer during the pandemic, some 50% of regular capacity.

The graph also demonstrates signs of a slow recovery in June, represented by the increase of all ship visits to almost 2400. On a smaller scale, there is also an uptick in unique ship visits. Analysts explain this growth as a result of the usual autumnal increase in consumer spending. However, two pivotal points remain unclear; whether consumer demand will indeed resume to pre-Covid levels, and whether the long-term costs resulting from the shipping industry being compelled to ‘lay up’ vessels will prove prohibitive. In an industry that moves 90% of global goods, with several ‘too big to fail’ operators, many will be closely observing developments.

The idle vessel problem caused by the pandemic draws comparison with the financial crisis, when idle ships increased by 13% during 2009. In Q1 2020, 10% of global vessels were forced to ‘lay up’ and by the end of May it stood at 11.6% of capacity. The biggest container lines Mediterranean Shipping Company (MSC), APM-Maersk and CMA CGM Group had an inactive capacity of 12.9%, 9.5% and 2.3% respectively.

A recent FT article stated that the market share of the big three shipping giants’ market share grew from 29% in 2011 to 80% in 2018, with many commentators decrying the lack of competition this causes. Indeed despite the crisis, it is important to mention that until June, many of these leading operators maintained their usual orders for large numbers of new vessels- triggered by 2008 price cuts by shipyards. Maersk booked 15 container ships, MSC booked 12 and CMA CMG booked 27. The Hyundai Merchant Marine company even launched the second of twelve ‘megamax-24’ containerships, with a capacity of 23,752 TEU (Twenty feet equivalent unit).  Currently one of the largest in the sea, these vessels are larger than four full sized football pitches.

Most shipping operators have faced the headwinds of collapsed demand, all but stopping transit to Europe and the Mediterranean zone. Many have responded by targeting strategic ports around the world, including in China, where 7 of the 10 biggest global ports have already resumed business as usual.

For the operators, the downtime has also represented an opportunity to update their fleet in order to meet environmental regulations. This has included activities such as the modernisation of the ships (specifically ‘scrubbers’) to bring the levels of the pollutant sulphur dioxide down. Such is the case of Maersk and MSC where more than half of their vessels are undergoing scrubber retrofits, representing around 30% of the global inactive fleet.

Almost all the maritime supply chain will suffer from the fall in the demand, from shipping financing to vessel-leasing companies, including the port operators and small ‘feeders’ that ferry loads from the biggest ports to other smaller destinations. The shipping industry will likely undergo some consolidation, with larger vessels replacing the smaller, and many businesses that serve these operations likely to suffer. Many of the larger operators have protected themselves via the leasing of vessels rather than owning. Indeed, 80% of the Maersk, MSC and CMA CMG Group containerships are chartered and only 20% owned outright. It is safe to assume therefore that many of these operators will renegotiate leasing terms with smaller suppliers and that most of the capacity cuts will hit the lower segments of the logistics chain.

The dramatic drop in oil price during the crisis has had a delayed effect on the tanker (refined products ship) business. As oil producing nations, particularly Saudi Arabia, flooded the market with increased production and many thousands of barrels in need of transportation, there was an initial drop in freight rates as operators moved to meet demand. This was followed by an increase in freight rates once markets became saturated and the Covid-induced fall in demand for oil had taken hold.

Although the main decline will be felt by both general cargo vessels and tankers, the effects of the pandemic will vary. In Q1 2020 alone, global consumer demand, served by general cargo vessels, dropped vastly with the available data for April and May following suit. While some critical goods like food and pharmaceuticals have been allowed to enter ports and reach its destinations, much of the global movement of cargo has been held in warehouses  creating accumulation problems. Quoted in Politico, Peter Ward, CEO of UK Warehousing Association stated that ‘We are going to reach a pinch point where there is no warehousing, nowhere for this stuff to go and we must avoid at all costs the risk of ports becoming congested.’.

Similarly, demand stagnation of around 16.9% has hit the tanker business, especially chemicals, pharmaceuticals, textiles, electronic components and vehicle parts. As might be expected, the collapse in the transportation, aviation and tourism industries (which account for 55% of global oil demand), has had severe implications for tanker operators. Similarly, plastics and petrochemicals account for 19% of oil demand. It is hard to predict when these industries will return to full health.

The longer these crises last, the deeper the economic scarring will be. Indeed, for the big containership lines, any fleet in so called ‘cold lay up’ is of particular concern. Such vessels’ return to service will cost millions of dollars and require extensive testing to certify safety to sail.

In the UK case, there has been some rejuvenation of the ‘free ports project’ for northern ports in line with many Brexit supporters’ desire to reduce or eliminate tariffs and open England up to the rest of the world. However, some economists have suggested that the longer the COVID 19 pandemic lasts, the greater the likelihood is that nations may begin to pursue more isolationist policies in attempts to become more self-reliant. Accordingly, concerns exist around the possibility of new barriers and local regulations in global maritime trade, or that nations seek to extend their flag protected fleets, leading some to expect a particularly painful and stilted recovery.